Play Pause Unmute Mute
Religion or faith have no bar here. You could even be non-religious. Yet, the sanctity of Harmandir Sahib, popularly known as Golden Temple will touch your heart. It is located in the city of Amritsar in one of the northern states of India, Punjab.

Main entrance of the Golden Temple in Amritsar

The long path in the lake is the approach to the main temple. Inspite of round the clock devotees, discipline prevails. 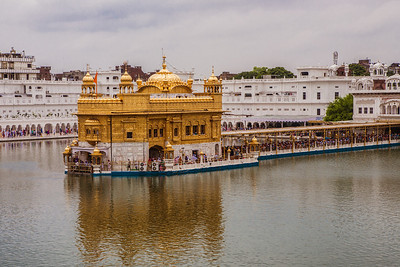 The Golden Temple is the most revered gurudwara for the Sikhs. Harmandir Sahib is its official name. But due to its the gold plated building, devotees lovingly refer to it as the Golden Temple.

The main building of the Golden Temple is surrounded by a lake. People of all religions come here in huge numbers to offer prayers and take a dip in this supposedly holy lake.

We spent an entire day at the Golden temple. Spent hours sitting by the lake on the sparkling clean floor, admiring the beautiful Golden Temple in front. We could just feel the devotion in the air. 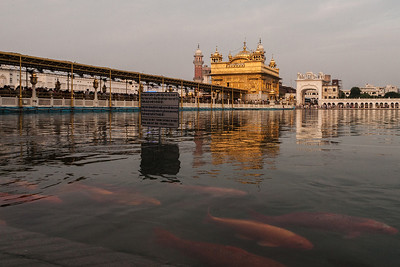 Golden Temple in the golden hours

Both the sunrise and the sunset are glorious in the premises of the Golden Temple. 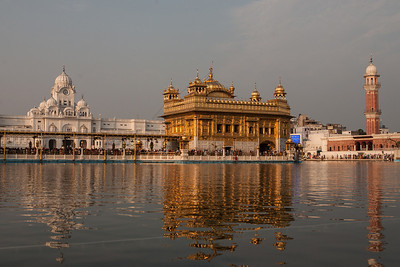 As the sun sets, the Golden Temple is bathed in beautiful yellow and blue lights. You can actually spend the entire night at the Golden Temple. Just get a sleeping mat and lie down on the marble around the holy lake and enjoy a blissful night.

The long wait in the queue to get inside the Golden Temple is totally worth it. Have patience as the queue slowly but steadily inches forward. Because The insides have to be seen to be believed. Photography isn’t permitted inside. You have to store in your memory the beauty that accosts you. It is two floors of sheer brilliance. Probably even more beautiful than the Taj Mahal!

Take all your time to soak in the art around you, the music reverberating inside.

Culinary tourism around the Golden Temple

Food from Punjab is the most well known cuisine across the world. And Amritsar is brimming with “dhabas“. These are small, traditional eateries run by the same family fro generations. We went to one of the oldest such dhabas, named Kesar da Dhaba.

It is over a hundred year old establishment in the maze-like markets of old Amritsar is famous for cooking all their food in “desi ghee” (Indian equivalent of butter). Like all things Indian (food), it is rich, tasty and devoid of preservatives.

We had a lavish lunch of Dal Makhani, Chole and Paratha in the Punjabi Thali in Amritsar at Keasr da Dhaba. For the non-Indians, that is: Buttered lentil curry, Bengal gram pulses cooked in a spicy curry and layered Indian bread.

This single “thali” (meal plate) was more than enough for the two of us. All one should ideally do after eating this is find a beautiful tree, lie down in its shade and dream of the culinary extravaganza you have just experienced.

Visit to the Wagah Border in Amritsar

While visiting the Golden Temple, we also did a half day trip to the “lowering of the flags” or the Beating Retreat ceremony. It is performed jointly everyday by the armed forces of both the countries. It is one of the major tourist attractions in Amritsar.

Outside the Golden Temple, you will find hordes or taxi drivers asking if you would like to visit the Wagah border. There isn’t much difference in the prices and services that they offer. Just pick one that agrees to leave at the earliest.

Like this story? Have any questions about traveling to Golden Temple or Amritsar? Let us know in the Comments section below.

Need travel ideas for where to go after Golden Temple?