Play Pause Unmute Mute
Rajasthan, the desert state of India is a prime tourist destination in India. Studded with “must sees”, it can be difficult seeing it all in one go, especially if one is short on time.

Instead of just rushing through the sights, choosing a variety of different activities in the various cities of Rajasthan will be a more fulfilling experience.

We had just a day for our visit to Jaipur.

Read on for tips on things to do in Jaipur in super short 24 hours. 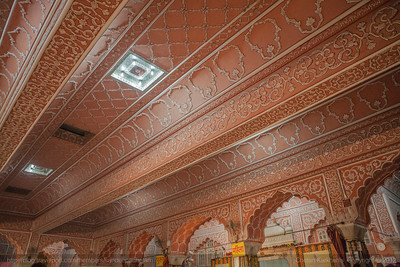 We were in Jaipur during the Diwali festival. It was our first Diwali away from home and Jaipur gave us a wholesome experience.

As we wandered the streets around the Jaipur palace, a brightly lit lane caught our attention. Hordes of people, dressed in traditional finery were proceeding in its direction. During Diwali, this could only mean one thing: a temple nearby.

It was the Govind Devji temple, dedicated to Lord Krishna.

Built in 1735 by Maharaj Sawai Pratap Singh, the main idol faced the window of the king’s bedroom in his palace. His day would begin with a “darshan” (sacred viewing) of his beloved deity.

Today, the temple affords an unobstructed view of the idols to the thousands of devotees who gather for prayers. This means there are no pillars in between. The construction was an architectural challenge.

The feat earned this temple a name in the Guinness Book of World Records “for having the widest single span RCC flat roof”. Back in the 18th century, the royal family got some highly decorative bejewelled costumes designed for the idols. There are five of these special costumes, each one costs a whopping Rs. 25 lac (37K USD). On auspicious occasions like Diwali, the idols are dressed in this glittering extravaganza.

We were told this story very fondly by the locals who had come to offer their prayers. Clearly, the temple and its legend was something the people of Jaipur held in high regard.

Through the devotees, we got to see the cross-section of social life in Jaipur: traditional old families with the “purdah” clad women, to young modern families.

One tiny old lady particularly caught our attention. Clearly, this was a special outing for her. She had come all decked up; her heavily sequenced finery literally weighing down her frail frame. She and her husband seemed to be having a good time. We saw them laughing and joking around. When she couldn’t see the idols from her seat, her husband helped stand up. Oblivious to the crowds around, they were just happy to be where they were!

We are not really temple goers, us being at a temple for Diwali was kind of an irony.

Visiting the Govind Dev Ji temple on Diwali, along with the rest of Jaipur, made us feel like we too were part of the celebration. 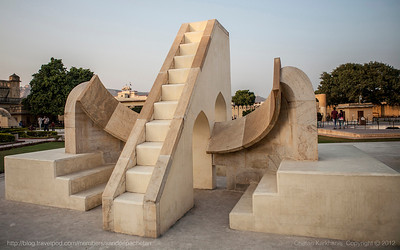 Earlier in the day, we had visited the Jantar Mantar. It was commissioned in the early 18th century by king Jai Singh II, a big fan of science and technology.

Besides being the biggest and the oldest astronomy laboratory in India, the Jantar Mantar in Jaipur is also a UNESCO World Heritage structure.

We rented an audio guide, which explained the working of each instrument in Jantar Mantar in the form of Q&A. One needs to be quite astronomy-aware to understand the audio guide and Jantar Mantar better. To be honest, it was tough for us to grasp much of what the audio guide said. But it was enough to realise that people of the yore, were some sort of geniuses!

Right across the Jantar Mantar is the famous Jaipur Palace. Since we were short on time we chose Jantar Mantar over the Jaipur palace. But a trip to the land of royals is incomplete without a visit to the palace. We decided to visit the Amer Palace on this trip. 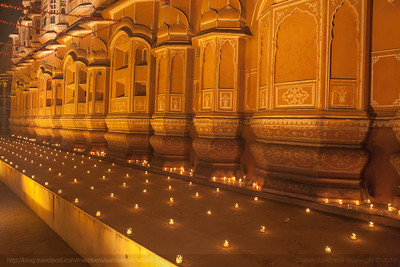 It sparkled in the glow of lamps and candles with which it was decorated for Diwali.

Hawa Mahal stands out for its multitude of latticed windows right in the city centre of old Jaipur. The windows with their fine latticework were meant to act like veils; a “purdah” for the royal women. Custom dictated that royal women wouldn’t be seen by the public. They were also not allowed to venture out into the streets.

Brought to mind the pigeon from a John Keats poem, who is kept in a golden cage with its feet tied to the cage.

We were also privy to another Diwali experience unique to Jaipur.

The streets were lit with colourful lights, some of them quite snazzy. Everyone was out on the streets to see these lights. Seeing the jam-packed roads, we assumed we were being led towards something. Only to realise, the lit up streets were the thing! 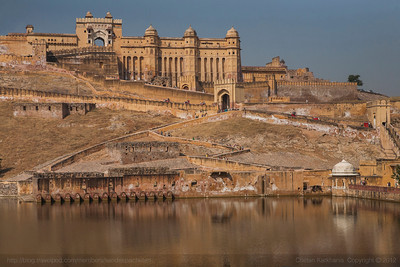 It stands as a resplendent reminder of the Rajput valour and glory before it all sadly succumbed to the British Empire.

Getting from Jaipur to Amer fort

The Amer fort is at a distance of 11km from Jaipur and is well connected by local public transport.

On the way to Amer, is Jal Mahal, a palace half submerged in water. We were excited about the photo-op here, having seen hypnotic photos of the Jal Mahal bathed in a blue and golden light, floating in the lake. Unfortunately, the sorry state of this structure was worth just a view, nothing more.

Once we got past the incessantly insistent guides at the entrance of the Amer palace, we could start observing its various aspects.

Since we wanted to explore the palace at our own pace, we opted for an audio guide here as well. Besides Hindi and English, it is also available in a few foreign languages. It was a very handy tool in making our way around. 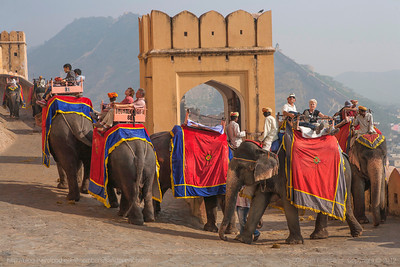 First things first, we are not completely sure how good the elephant rides are for the animals.

Steep climbs are not really an elephant’s best friend. Besides, this path is cobbled and uneven, which poses an even bigger hindrance. How well the elephants are fed is also a matter of suspect.

We believe one should consider it their responsibility to verify these things before deciding to take a ride. 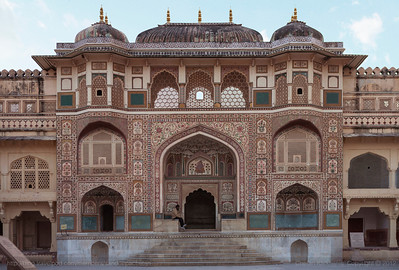 The audio guide described the functionality of the different parts of the palace. Walking through the various sections, we began to comprehend how well design and function were synced together.

We were transported back to 16-17th centuries. The dramatic stories about the royals gave us an insight into their lives as well as those times. We were awed by some stories, some others were just outright amusing!

We were expecting to be done with the palace in a few hours but ended up spending an entire day there. It was almost closing time when we got out. The sun was starting to set. We sat down on the grounds of the front yard, enjoying the breeze and the diminishing light. The evening prayer had started inside the palace.

Just sitting there in the quiet, the enigma of the place hit us.

We were in a land steeped in history, the land which gave birth to some of the greatest musicians and the bravest warriors the country has ever known.

Rajasthan indeed was a magical land! 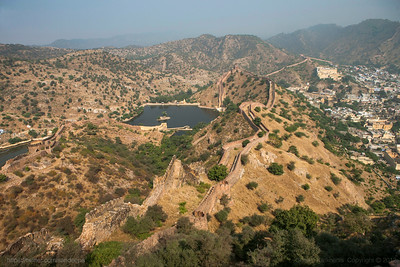 Next to to Amer Palace is the Jaigarh Fort.

It was regarded as an elder brother to the Amer Palace, keeping a watch on the palace and protecting the city from its enemy.

There is a motor-able road leading directly to Jaigarh Fort. We took the pedestrian pathway that leads up to the fort from Amer Palace. A secret passageway also connects Amer Palace to the Jaigarh Fort.

As we gained elevation, more and more of what was a walled city started revealing itself. These aerial views of Amer were well worth the climb.

Exploring the fort on our own, without any guideline felt like being lost in history. Some parts of the fort were pretty obvious, others made our imagination run wild!

In Jaipur, we experienced the full spectrum of culinary senses.

For breakfast, we headed to Rawat Sweets, a sweet institution in Jaipur. Like the rest of the city, we had Mawa Kachoris. These are deep-fried pancakes filled with condensed roasted sweetened milk, dunked in a sugar syrup. The first couple of bites were exciting, but the entire kachori at 8 AM was taking the sugary ride a bit too far!

Contrary to this, for dinner here, we had Dal Bati Churma, Kair Sangri and Gatte ki Sabzi (can’t really explain these, one has to eat to understand!), all traditional foods of Rajasthan. One word – SPICY! They first teased us with their bursts of flavours and then left our tongues numb with all the spice!

We enjoyed some savoury snacks at Sri Ram Chat Bhandar, a fifty-year-old store in one of the bylanes of old Jaipur. Topped it with a wonderful milk based sweet at Ramdev Sweets, an equally old place opposite the Chat store. The owner regaled us with tales of celebrity visits – politicians to Bollywood stars – to his store.

Food in Jaipur is exemplary for sure, but definitely not for the faint-hearted.

Jaipur is a city built around tourism. Especially foreign tourism. One has to be prepared to be pestered by the rickshaw drivers who follow you to the point of stalking.

Guides can speak foreign languages. They insisted on speaking in English even when we answered back in Hindi. But nobody meant any harm.

It was interesting to hear people still refer to royalty as “Hamare Maharaj” (our king).

The princely nature is integral to this land. It is in the genetic makeup of this place.

This is an important part of what makes Jaipur (and Rajasthan) a fascinating experience.

Need travel ideas for where to go after Jaipur?

Mountain passes we crossed in the Himalayas