Offbeat Rajasthan: A touch of real at Jaipura Garh

Jaipura Garh was a home. It didn’t just look good but FELT good. Outside was a real village.This was a real Rajasthan experience; offbeat, luxury and raw.
The hearth was fired up and Tulsa was busy piling up the rotis next to it. Her husband had taken Chetan to their cattle shed. I chose the warmth of the fire and asked Tulsa if I could sit next to her as she prepared breakfast for her family. “Here, have one”, she said and thrust a roti straight off the tawa (pan) into my hands. The piping hot roti felt blissful in my palms, as I sat there breathing out mist. Her granddaughter promptly brought out a bowl of makkhan (homemade butter) and plonked a dollop on the hot roti. Tulsa then crushed half of the roti into the melting butter. I felt like one of the little kids I had just photographed outside the house, smiling gleefully as the fresh, wholesome butter soaked bite of the bajra roti filled my mouth. “Bajra (millet) does well for you in this cold”, she said. 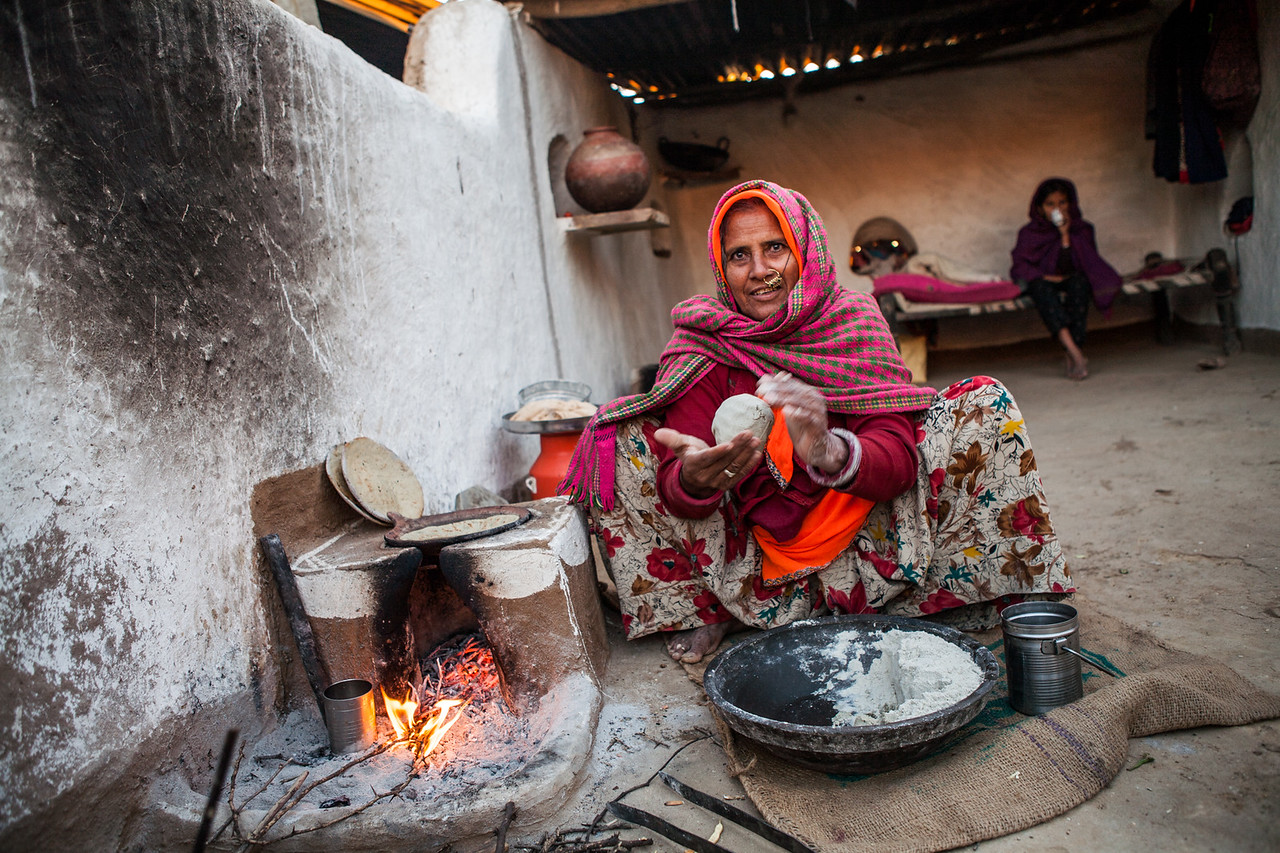 Throwback to golden times, a sense of what’s real Rajasthan

It was our last morning in the village of Jaipura, around 40 km away from the city of Jaipur, the capital of Rajasthan. We were staying at Saffronstays Jaipura Garh, erstwhile home of the Jagir of Jaipura, who was gifted this land by Maharaja Sawai Madho Singh I. We were aware of this royal lineage before we got here. Obviously, being surrounded by history and luxury were a given. 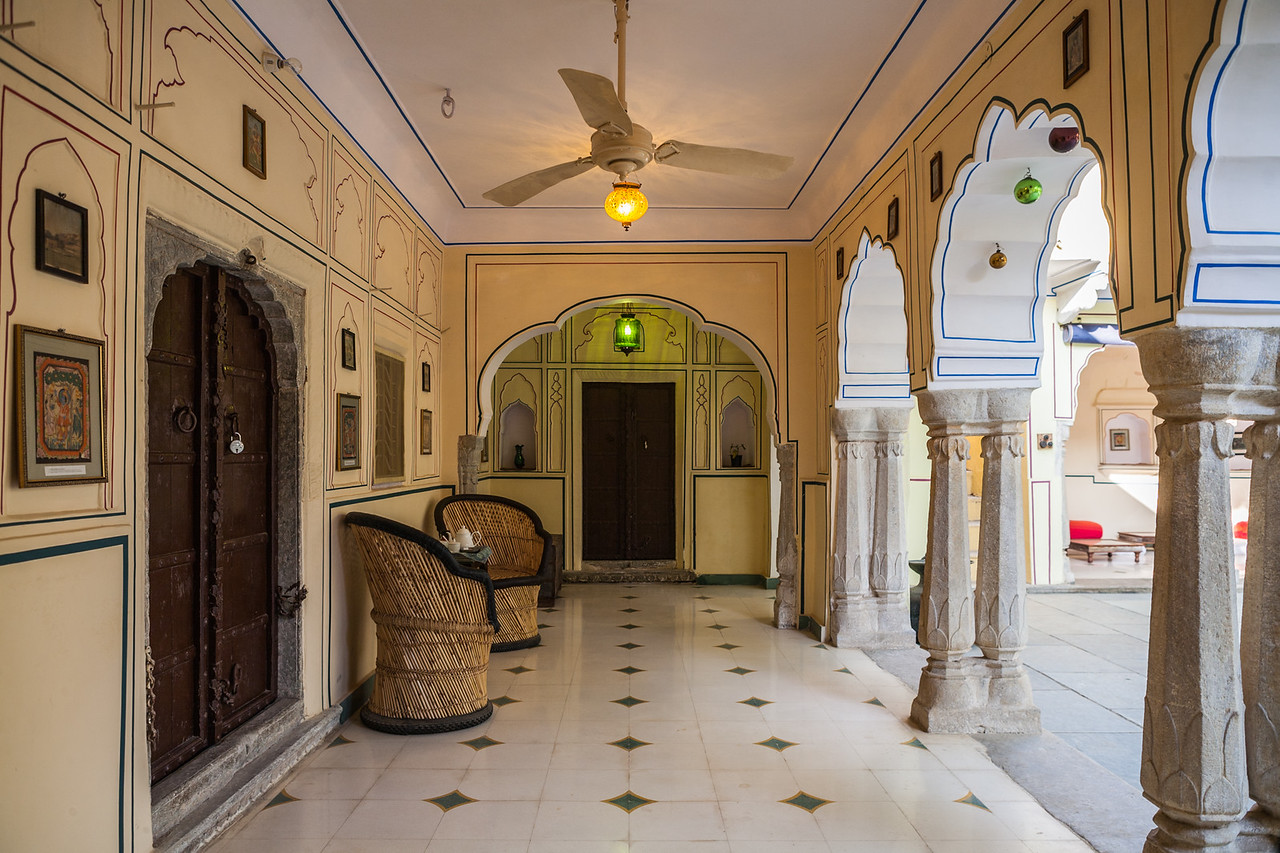 What we didn’t expect was a golden welcome! Golden of the mustard fields all around. Golden of the early morning winter sun as well as the walls of Jaipura Garh. And golden of Babulalji’s smile as he welcomed us. A genuinely warm smile minus the overdone pretence of tikka and garlands was refreshing. 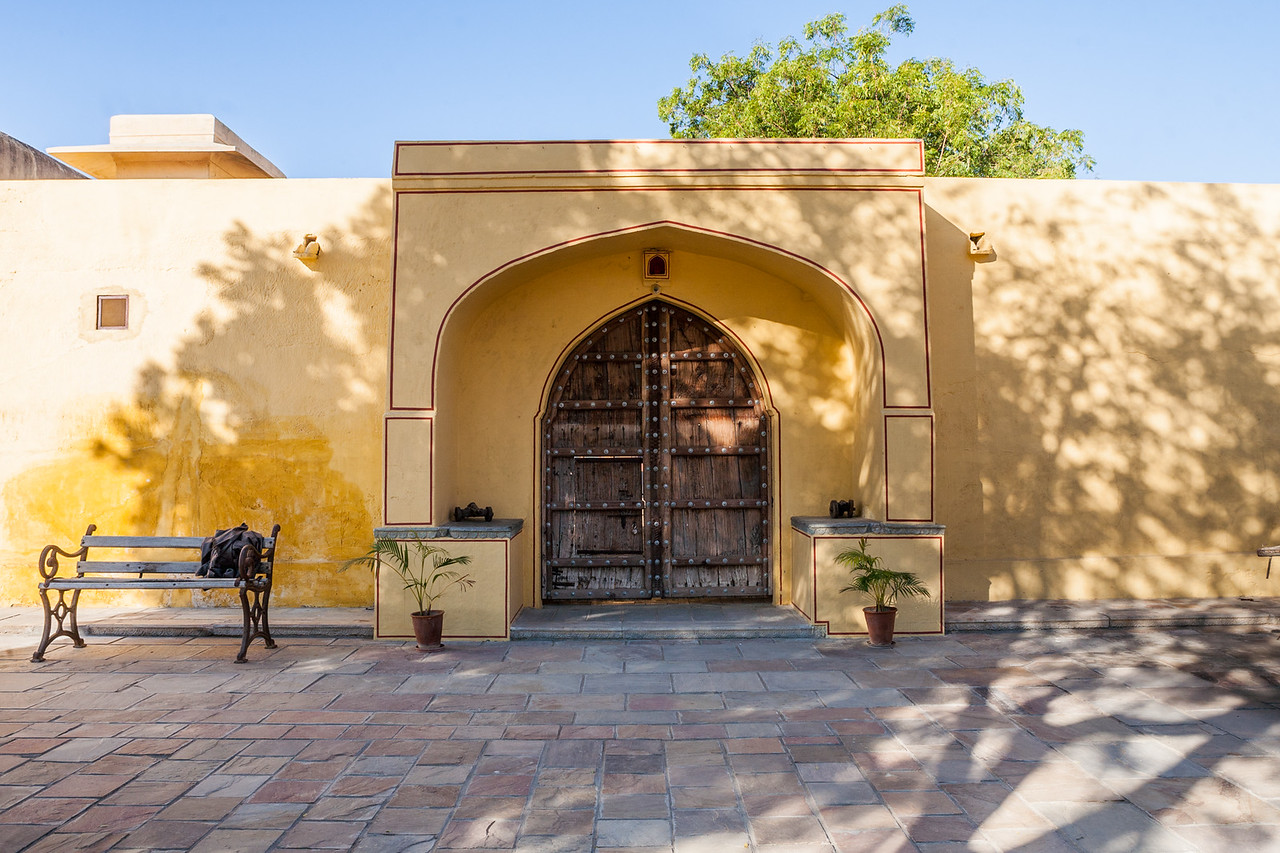 Jaipura Garh was an artist’s expression. Like a piece of art in a gallery, it captivated us, then drew us in to explore more. Everywhere our eyes went, there were tiny features that mesmerised – in the drawings on the walls and pillars, the works on the lamps or the hooks of the doors – not a detail felt out of place. The photos on the walls told stories of the rich history of Jaipura Garh and of Rajasthan, the artifacts gave a glimpse of a bygone era.

The rooms too had the same attention to detail 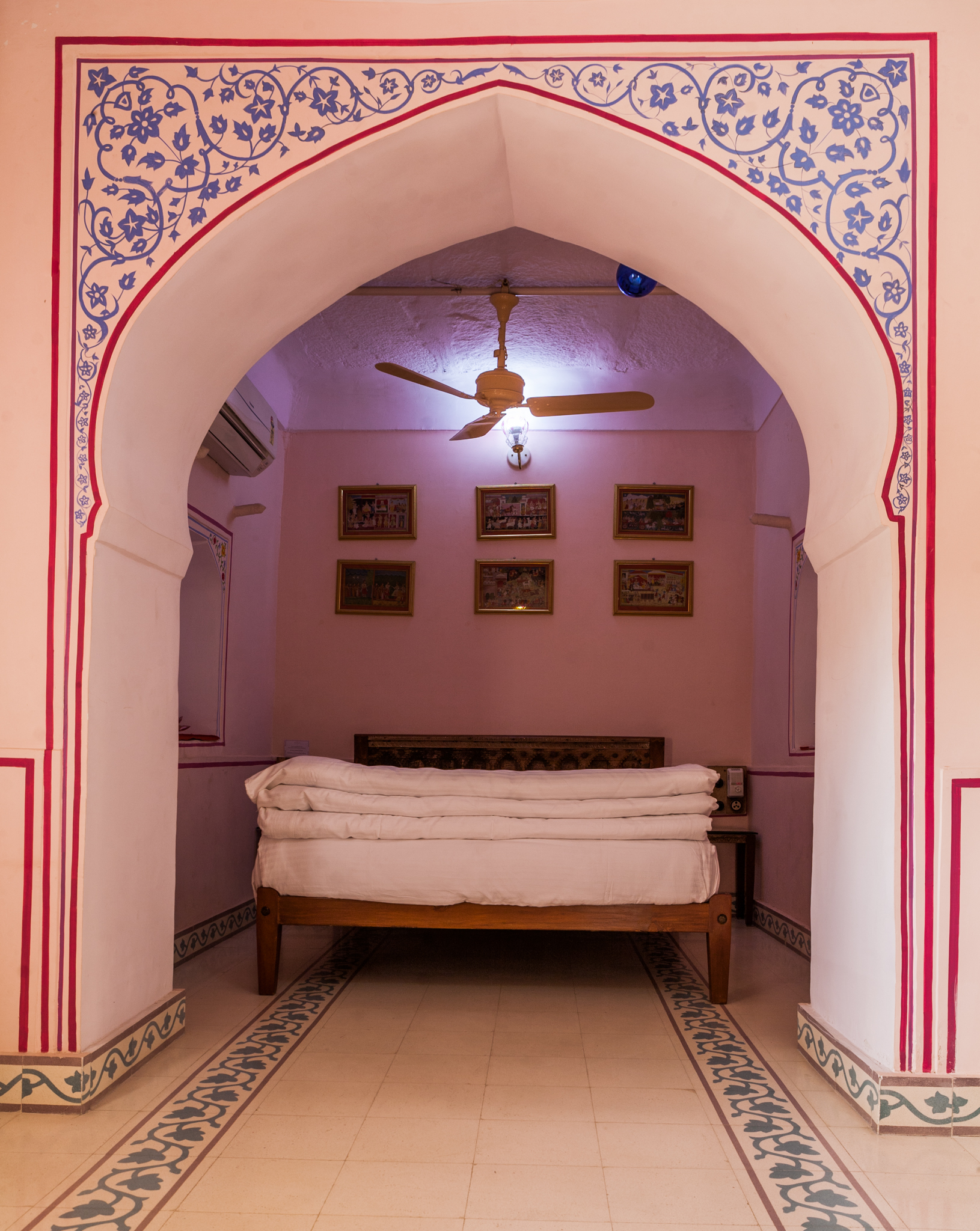 What caught our attention, though, were the corners. Each with its own characteristic seating. Each inviting us to come sit and spend some time with it. Have an intimate conversation, perhaps? Share stories with your friends over a game of chess? Or get comfortable with a cup of coffee in hand and drown yourself in a nice thick book.

If not, just be. In the open courtyards with the neem tree as a witness. Choose to have all the time in the world to just live that moment. 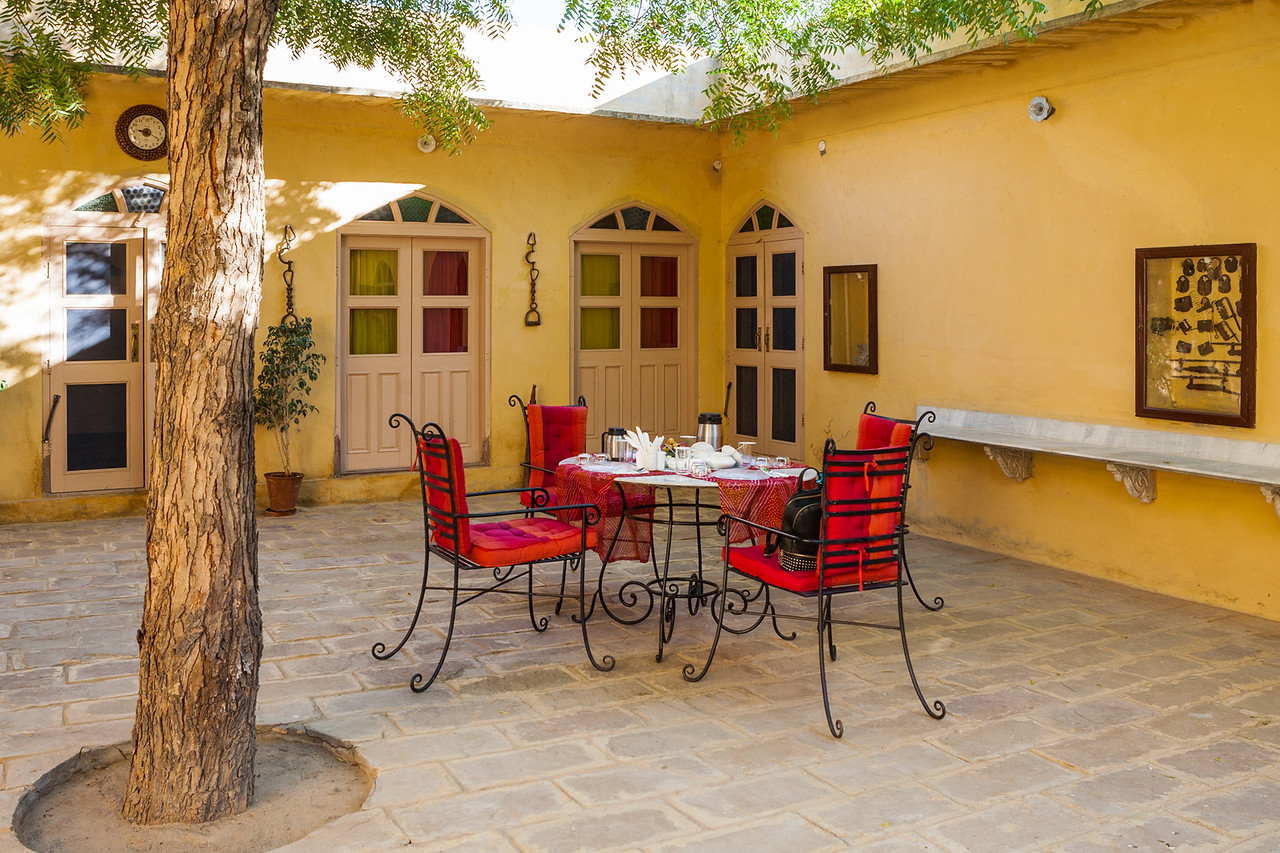 It was perhaps this vibe of Jaipura Garh that from the moment we stepped in through its tall doors made it feel like home. A place to create memories and celebrate love. A place that didn’t just look good, but felt good too.

Riding a camel through, a glimpse of rural real Rajasthan

And just outside was a whole lot of “real Rajasthan” to be discovered. We had got a glimpse of it as we drove in through the mustard fields and mud houses. Nathu and Mukesh gave us a more intimate look at this life when they came to pick us up at Jaipura Garh.

Nathu lived in another village close by and Mukesh was his dear camel. After a lazy, long drawn lunch, we readied ourselves for our first ever camel ride. This was our first close encounter with a camel (we had seen lamas earlier in South America, they belong to the camel family but are much smaller). They look lean in pictures but are quite strong in reality.

Excitedly, we went a bit too close to Mukesh to click photos. Luckily, we managed to get out of his way when he swooshed his neck around, making space for himself. After that, we respected each other’s personal spaces and all was good. The only person who was allowed within these unseen boundaries was Nathu, his rider. So every time we moved a little closer to Mukesh, we would ask Nathu if it was alright!

From that close distance now, we saw the fine artwork on Mukesh’s hair. There were coloured flowers cut out on his back, even his tail was shaped to look like a braid. Nathu was very proud of these designs on his camels and said there was more work left to be done.

It was a fun ride, first through the village of Jaipura, Sevapura and Dhoosari – the villages around Jaipura Garh. The mustard fields wowed us throughout the ride. Bathed in the golden light, now of the setting sun, each new farm was exciting. Wordsworth’s daffodils came to mind – their dance was the same as was our glee. And, we reckon, just like the daffodils, in our pensive moments, these mustard flowers will fill our heart and make it dance with them.

The villages had a relaxed end-of-day mood with everyone either already home or on their way. They were one friendly lot, greeting us with Namastes. When they saw the cameras in our hand, they’d ask if we had taken their photos as well!

The kids were out playing and when we asked them if they wanted to race with the camel, they all started running behind us, some naughty ones even trying to get on the cart.

How good an artist are you?

A potter from Sevapura – the only one in the nearby villages was waiting for us at Jaipura Garh. He had brought his potter’s wheel and mud. As pots in various shapes and sizes came off his skilled and trained hands, it all appeared really simple.

One by one, we all tried our hand at it. One by one, we all failed. Slowly but surely, the mound of mud on the wheel reduced and that of discarded mud increased. “It’ll take some more practice”, we all consoled ourselves.

The potter was unfazed and in the dwindling twilight and increasing cold he created masterpieces like a pot within a pot, a long slim vase, a lamp and many more. Despite our miserable failures, the art of pottery charmed us. The soothing feel of the rotating mud gently pressing against your fingers is rather therapeutic. This one goes on the list of skills we wish to master!

A couple from the village had brought their collection of colourful lac bangles – the traditional bangles of Rajasthan, made out of the sap of a tree. The process of converting the sap to bangles is a long arduous one, well worth the price they quote for it. Shopping isn’t something we indulge in on our travels, but when it’s about supporting the local art and the artists, we are all up for it.

We had been loitering with the artists on the lawns of Jaipura Garh, while the stage was being set inside. We soon took our seats on the soft cushioned beds in the courtyard of Jaipura Garh. The chill in the air was just right for a round of piping hot soup.

Men in colourful turbans set the tone of the evening. Rhythmic beats filled the air. And then she walked in, gracefully. Turned to the musicians and smiled. One look at us told us, “be ready to be mesmerised”. 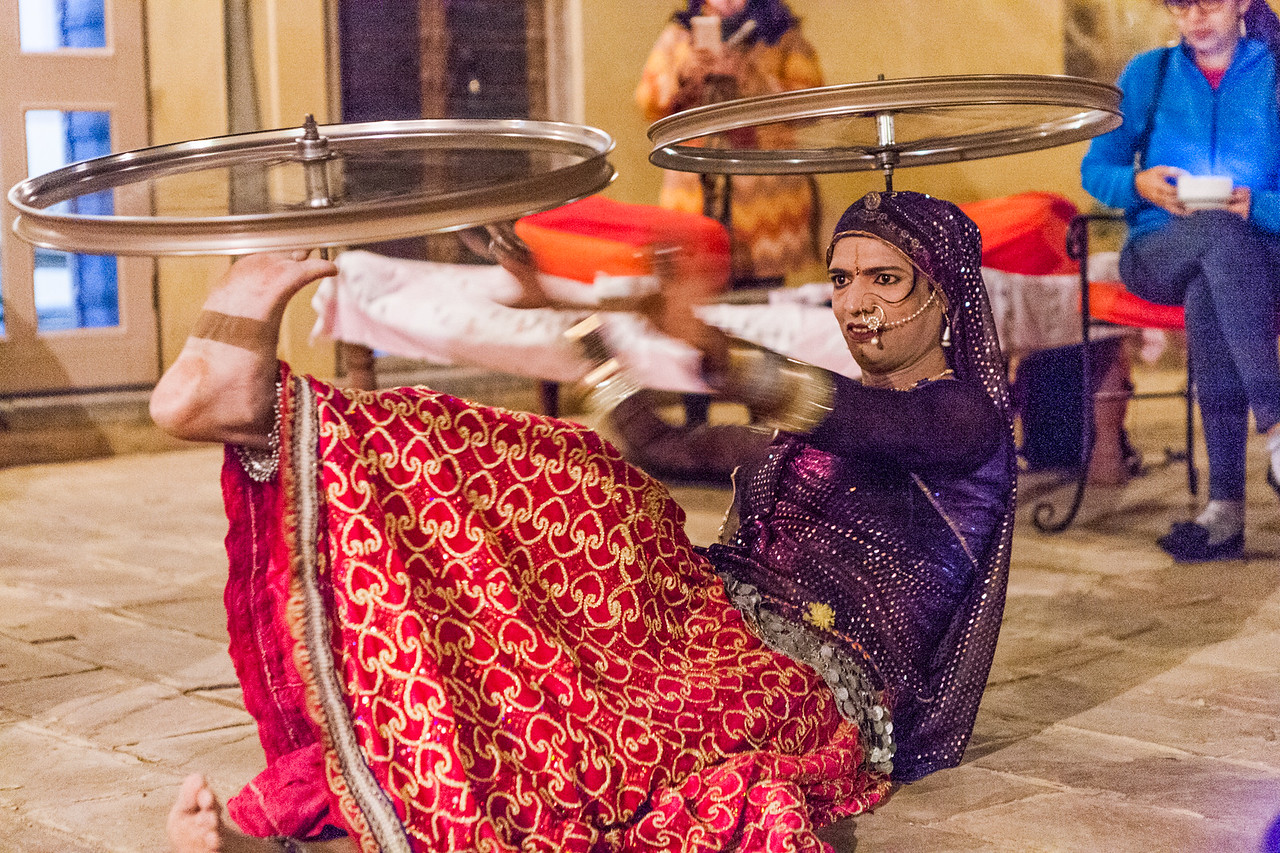 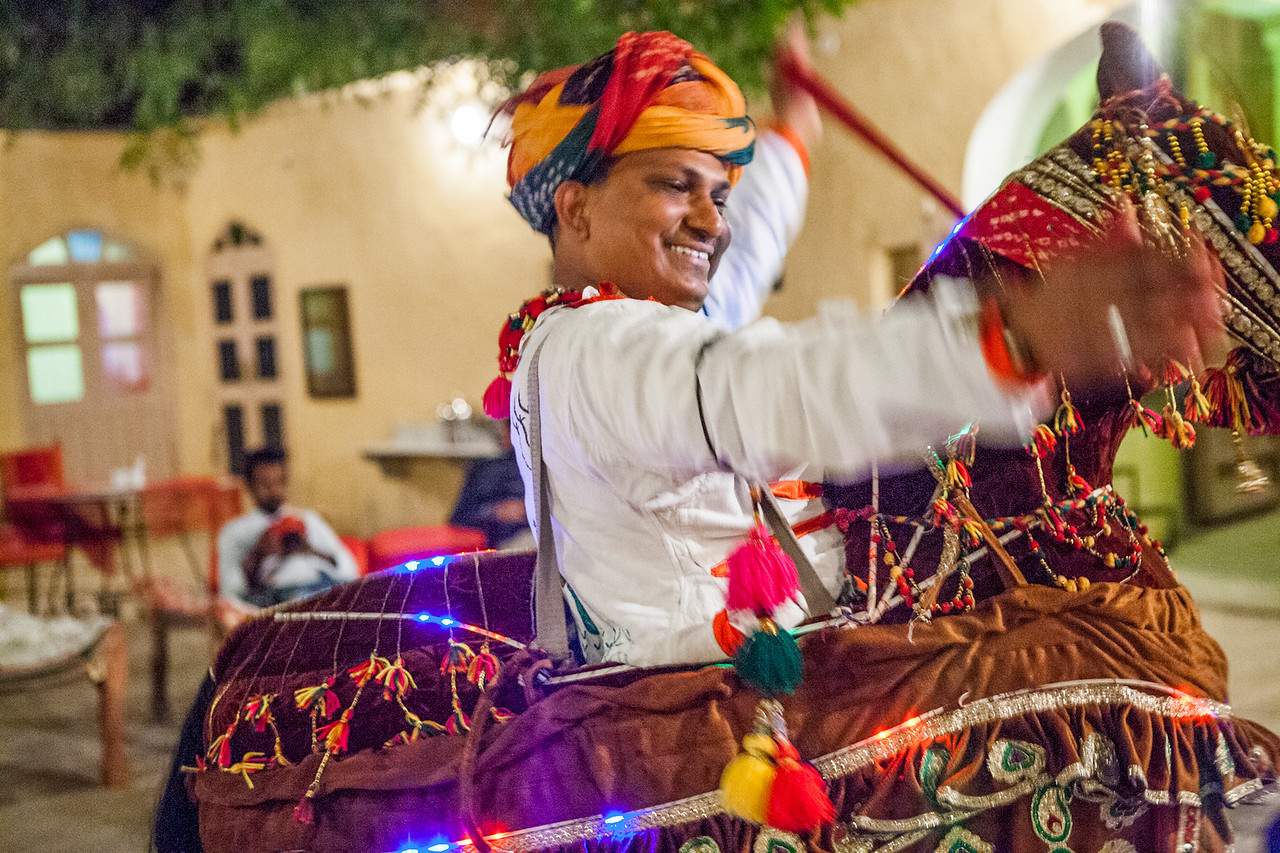 Dance after dance, she left us speechless. But when she walked in with two glass bottles, crushed them – with her hands and feet – and then danced over the glass pieces without a drop of blood anywhere, we knew we had witnessed some master artistry.

We weren’t sure whether to refer to the artist as he or she. But it was decided that since she was in the role of a female dancer, “she” it would be! More power to her and her art!

Let’s not even talk about the food at Jaipura Garh

From morning to evening, be prepared for your taste buds to be assaulted with flavour. The chef at Jaipura Garh is at the top of his game!

We generally recommend travel as a means to stay fit and lose weight. Not a chance at Jaipura Garh – you will return rounder, but happier.

Be it the delicious poha, cutlets or sandwiches at breakfast, the shahi paneer and malai koftas for lunch or the dal-bati-churma with a full-fledged traditional Rajasthani spread for dinner – you will eat and eat some more. And then, as you are getting warm and cosy by the bonfire in the courtyard, they will lovingly get you bowls of gulab jamun and kheer.

Tips for exploring the real Rajasthan at Jaipura Garh 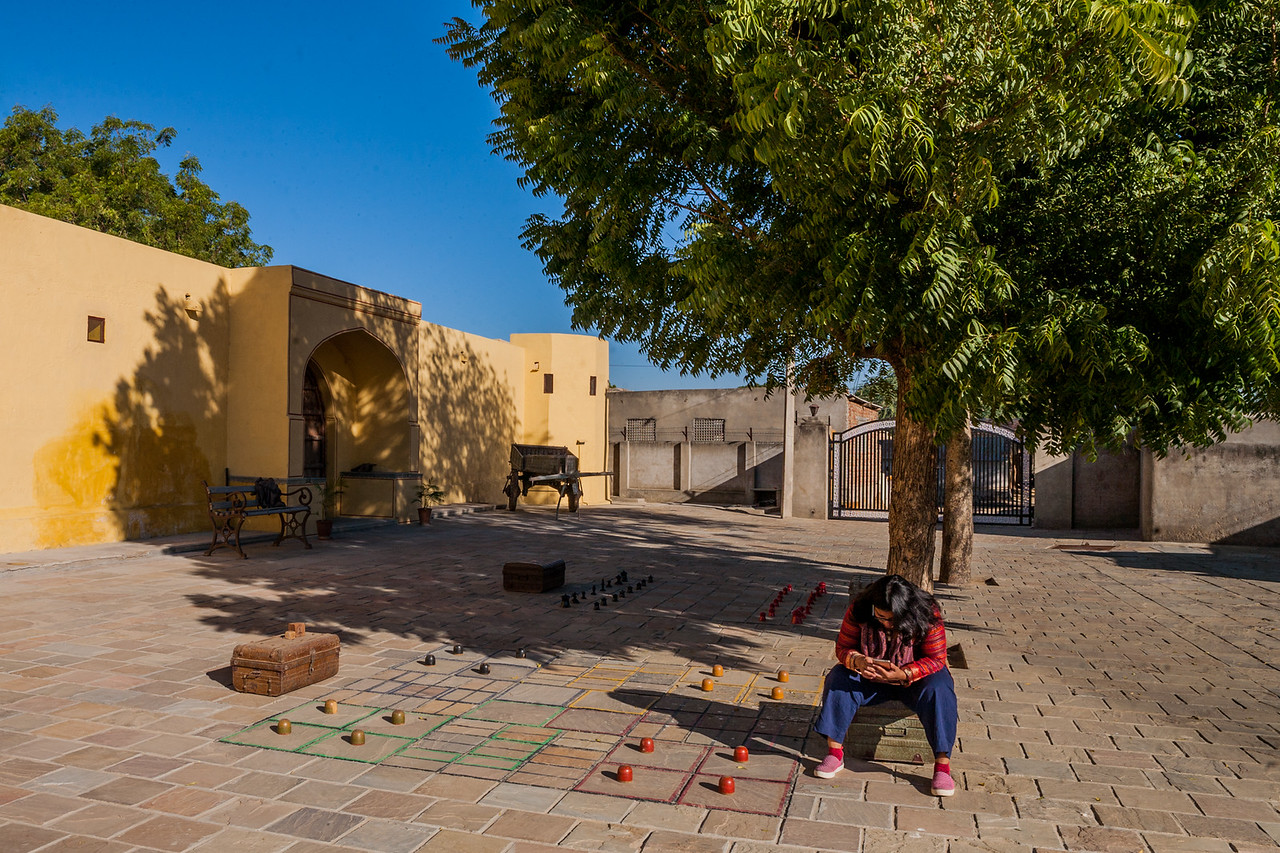 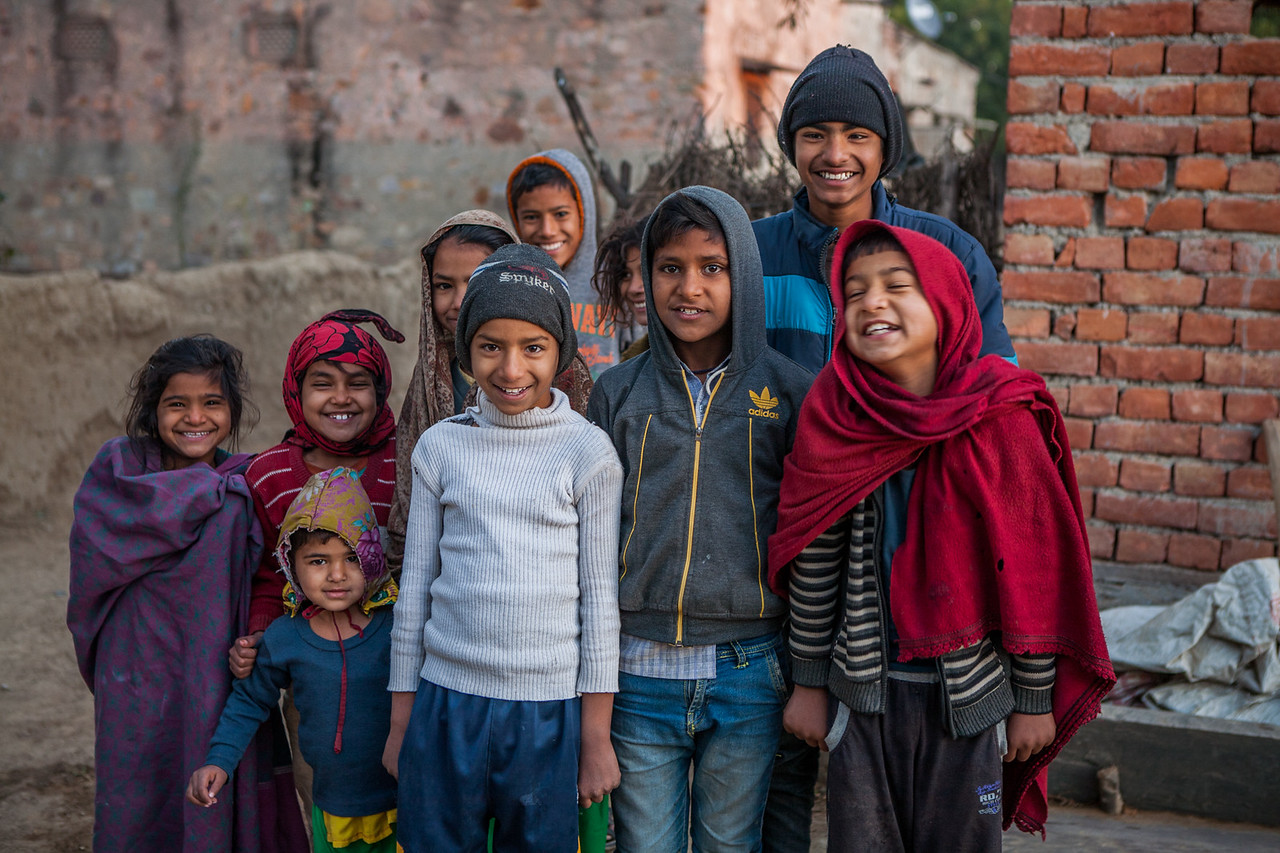 Are you looking for an authentic offbeat expereince in Rajasthan? Have you lived in a real village in Rajasthan? How was your experience of interacting with the people of Rajasthan? Do let us know in the Comments. Dirang Botique Cottages – the right place to stay in Dirang

“Ooh, that’s such a fairytale setting”, I exclaimed as the car came down the turn on the Bomdila-Dirang highway. I was looking at the faraway lights over the horizon glittering against the still blue sky of the twilight hour. What place is that? I asked Sange, who was behind the wheel. He only smiled. We 13 thoughts on “Offbeat Rajasthan: A touch of real at Jaipura Garh”