Exploring a rural Indian bazaar, a weekly market and a cattle fair

It was the weekly village market, albeit the biggest of the year. But a rural Indian bazaar, with its explosion of colour and activity, is never “just a market”. It takes a simple lifestyle to turn a weekly market into a carnival. We were lucky to have one such experience.

For us, it was a great time exploring rural tourism, interacting with the local people, being in the middle of all their celebration.

The cattle fair was a fantastic icing on the cake

We had the opportunity to visit this unique Indian bazaar, a cattle fair, in the small town of Rajur, in rural Maharashtra, around 270 km from Mumbai, India.
This weekly village market is the biggest social event for all the people in this region, it really is their Christmas!

Every year around December, the first Monday after “Dutta Jayanti” (The birthday of Lord Dutta), is the biggest market day of the year. The biggest cattle fair of the year is hosted here.

Schools were shut and no one worked that day. Everybody- entire families, kids in tow – were at the market, dressed in their festive best!

All the neighbourhood farmers attend this cattle fair 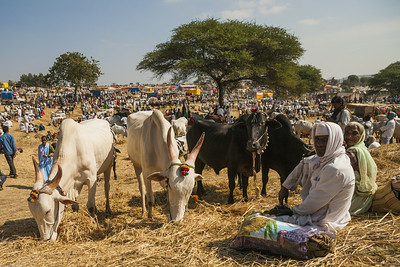 Village folks from as far as a 40 km radius come here to trade their cattle. Some of them would have walked for over two days to get to the cattle fair.

They stay on the grounds for two straight days, hoping to get a fair deal for their prized cattle.

It’s a big open ground, at the end of the village market where the cattle fair is set up. The ground feels like a mega congregation of the bulls, with thousands of them spread out all over.

Our guide, Balu Kondar of the nearby village of Purushwadi, arranged for us by Grassroutes helped us through the maze of the bulls.

The whole ground is abuzz with activity. Some are still decorating their bulls, making sure they look just right. Prospective buyers go window shopping, inspecting the bulls before they zero in on the one they would take home.

Many are just feeling the pulse of the market and the deals!

The farmer and his cattle

Balu gave us a farmer’s perspective on all that was happening around.

The cattle is a part of the farmer’s family. They raise and rear them with as much love and care as their own children.

The importance of their cattle to rural India is magnanimous. For small time farmers, who do not (and can not afford to) own tractors, the bulls are their only means to pursue farming and earn a livelihood.

This makes the bulls the farmer’s best friends, their children, their Gods!

We tried to comprehend what this connection means, as we watched the endearing bond between the farmer and his animal. 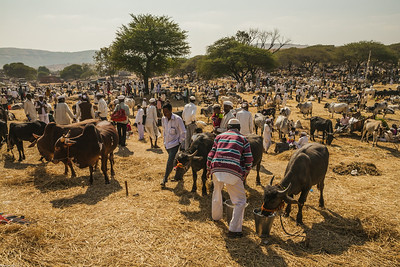 The farmers make every effort to feed the cattle well and keep them happy while waiting at the cattle fair. The cattle eats first. When they settle in for their mid-day siesta, the farmer and his family sit down for their lunch.

Lunch is the simle bhakri (a healthier, less glamourous variant of the popular roti) with some vegetable, chutney or – raw onion!

The bulls are decorated with special accessories. It’s like a bull dressed for a wedding! There is a strong patriotic feel to these accessories as well – do not miss the colours of the Indian tricolour! 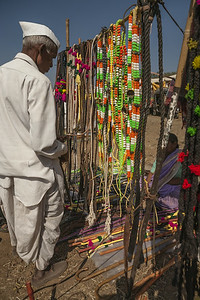 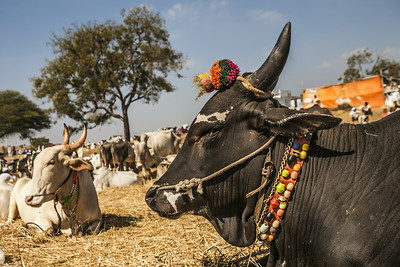 Every farmer wants his cattle to stand out. Colourful belts, bells and trinkets – the farmer’s affordability is the only limit to how fancy the bull is made to look.

A young bull, ready for farming activities is the highest prized at the cattle fair 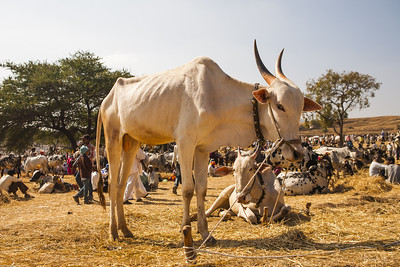 The teeth, Balu told us, were the best indicators of the bull’s age. The buyers would also carefully inspect the shine in the bulls’ eyes and get a feel of their muscles. For the farmers, buying the bull is a life-defining decision. 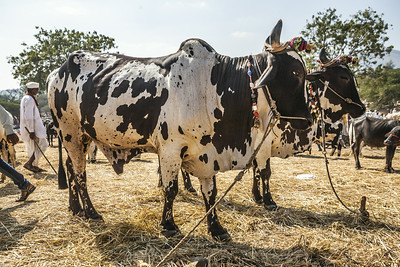 Balu explained the reason. Artificial insemination of the cows is now quite popular in rural India. Bulls born by this method of conception are single coloured – white, brown or black.

Only the ones conceived naturally are black and white in colour. Which is why they are seen only closer to the villages where the cattle population is larger. 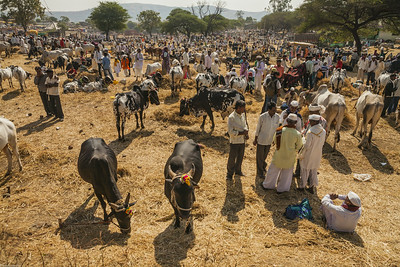 At such a cattle fair, a group of men gathered together, especially with some shawls around their necks – means some intense negotiations happening.

“What’s negotiation got to do with a shawl?” We wondered aloud to Balu. He only replied we would soon know! 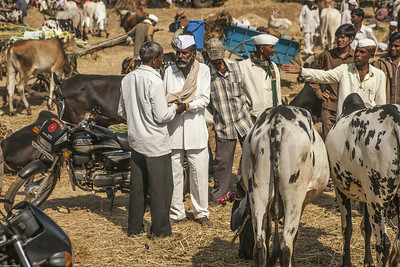 We did get lucky and got to witness a real deal at the cattle fair. Balu helped us understand its finer mechanisms.

Every farmer sets a price for their bulls, based mainly on their age. Nobody wants to reveal how low they are willing to negotiate.

That’s when a shawl comes in.

The farmers at the cattle fair have some fixed symbols representing certain numbers. The buyer and the seller put their hands under the shawl and non-verbal, touch-and-feel negotiations start.

The onlookers are a contrast to the negotiations. Their expressions speak a thousand word. Shouting encouraging words to the buyer and the seller, urging each one to have the deal go through. “Mara thappi mara” (Come on, pat the bull, already!), they start shouting is the deal seems likely to happen.

The buyer’s pat on the bull is final seal on the deal. It is the buyer saying “he is now mine”!

Thank you, Grassroutes for this wonderful experience!

Have you attended any cattle fair before? Or a rural Indian bazaar? Saw something peculiar that’s made a lifetime travel memory? Tell, tell us!

Like rural tourism? Here are some stories to give you more travel ideas 5 one-day outings from Pune to get close to nature

Pune – a culturally vibrant city in India surrounded by the hills. This location means there are ample options for one-day outings from Pune. In the lap of the Sahyadri mountain range (the western ghats are referred to as the Sahyadris in Maharashtra), Pune is connected by good highways in all directions. In little over

20 thoughts on “Exploring a rural Indian bazaar, a weekly market and a cattle fair”