Skip to content
Buenos Aires was where we started running away from the shadows. Shadows meant the colder side of the road. And in Buenos Aires, anything cold was not welcome. We started using phrases like “a lovely warm day”. We developed a never-before-felt love for the sun. Basically, we learnt what it meant to experience winter.

We had spent almost a month in South America by then. When we landed in Sao Paulo, winter was still just setting in. Rio de Janeiro, though rainy, fell in the tropical realm of things. Ilha Grande and the Iguazu waterfalls were also mainly tropical forests. But a 20-hour bus ride (from Puerto Iguazu to Buenos Aires) later, trees had gone from green to brown. The Southern hemisphere was greeting us, “Welcome to winter southern land!”

A warm welcome in Buenos Aires

Thankfully, we had the warmth of friendship and a real home to counteract this winter. Before we left India, Buenos Aires was the only city in South America where we had friends. In fact, our relationship with South America had started with Laura and Nico’s Couchsurfing request a couple of years back. Back when the plan to travel longterm was just a dream. They had stayed with us in our home in Mumbai. Then we had welcomed them as strangers. This time, we were meeting them as friends. On our first day itself, we did the most important activity in Argentina – having a steak lunch! We knew meat was an important part of not just the Argentinian food, but also their culture. But we hadn’t fully grasped it until we saw the steakhouse packed to capacity on that late Sunday afternoon. Families, groups of friends, couples on a date – every age group, every table was busy consuming meat – steaks, sausages, everything by the bucketfuls. The air inside was warm with the aroma of grilled meat and loud sounds of chatter and laughter coming from every table. Each meal on each table felt like a celebration. Happy people of the happy aired city – the literal translation of Buenos Aires. During that first lunch itself, we felt like we belonged to this city. We knew it right then, that even without speaking any Spanish, we would be at home here in Buenos Aires!

We decided to explore Buenos Aires as locals, as much as we could. The first step – get to know the local bakery. Almost every block here had its own bakery. Laura and Nico introduced us to the one in their neighbourhood. They also introduced us to facturas – different shaped breads stuffed with a variety of goodies. Walk into the bakery, select your facturas (four for each one was a good number, at least one had to be with dulce de leche!), pay the baker. Then drown yourself in the sweetness of each factura. The first day, we walked into the bakery, we were like kids in a candy store. We wanted to know what everything was and try all of it. We didn’t speak Spanish and the baker didn’t speak English. Yet we communicated enough for her to know we were staying here with friends and that we were from India. The next day, we selected our facturas with a bit more finesse. There was another lady there. She asked the baker if we were new here. Without having to ask us anything, she told her we were from India, visiting friends here. That one single line, transported us from a new bakery to “our bakery” in “our neighbourhood”. The lines of the title song from Cheers! “Where everybody knows your name” came to mind. We only smiled. Feeling like home in a new city in a new country was a privilege we were beginning to enjoy.

We started our exploration with a Free Walking Tour of Buenos Aires. It was called the “Historic tour of Buenos Aires”. We started at the National Congress building, walked through the main avenues and the buildings of historical significance, ending at Casa Rosada (the Pink House), the Presidential Palace. Through the walk, our guide, Martin, gave us an understanding of the socio economic scenario in Argentina. He told us of the tough times everyone in Argentina had faced when the economy collapsed in the 1990s. This walking tour was a good way to orient ourselves to Buenos Aires, with the city and its people.

We also came to know of the Argentinian fascination with Italy. One particular building we saw, Palacio Barolo, had everything Italian in it. It was built by an Italian architect. Its design inspired by Divine Comedy, the most famous work of the Italian poet Dante. People spoke Spanish with an Italian accent. Several times, their body language remind us of The Godfather. A lot of people we met in Buenos Aires and later in the south of Argentina also had an Italian passport. And everyone we met told us we had to try the drink, Fernet with Coke, a typical Italian drink, liked only in Argentina!

The cafe culture was omnipresent in Buenos Aires. People didn’t meet at the cafes to eat. They ate at the cafes to meet. You could have one cup of coffee, spend a couple of hours in the company of friends all along with free wifi.

The first time we went to a cafe, the waiter asked us if we would like to have anything more. We told him no, we were done, assuming it meant he would get us the bill. After waiting for over forty minutes, when the bill was no where in sight, we asked him how much we had to pay. Only then, he got us the bill! Coming from the densely populated Mumbai, where some places put up boards declaring “Do not sit any longer than necessary”, this was a striking culture shock!

Fashion and style in Buenos Aires

Walking through the lanes of Buenos Aires, the city as a fashion capital of South America began to unravel itself. We often heard references to “Paris of the South”. Grand old colonial buildings (many of which were actually built in Europe, and only assembled here in Buenos Aires), stood next to sprawling malls and modern condominiums.

The rich and the famous in Argentina believed in staying stylish even in afterlife. The Recoleta cemetery, where the who’s who in Buenos Aires are buried is testament to this. 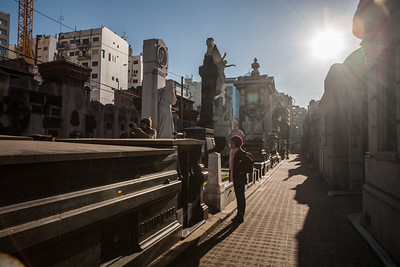 It has to be the most bizarre place we have visited so far. Rows after rows are lined with huge grotesque tombstones. It was a bit spooky walking through these highly decorated artistic structures and know there were only coffins inside!

Buenos is a massive city. A quick tour is not how we wanted to get to know it. We decided to get to know the city by the neighbourhood. Everyday, we would pick a neighbourhood and sit with the map. Nico would then tell us the best way, metro stations or the bus numbers to get there. Armed with these pointers, dressed in several layers of warm wear, we were all set to delve deeper into Buenos Aires, the city we were falling in love with.

Other stories from our travels in South America:

Rio de Janeiro: Warm even in the rains

Rio de Janeiro, the city of the sun and the sand welcomed us with heavy rains! But there is so much this city has to offer, that rains weren’t a dampener at all. This is a quick snapshot of what we did in the rainy yet marvellous Rio de Janeiro.

14 thoughts on “At home in Buenos Aires, Argentina”