“Which way to the airport express?” Blank stares, shrugs and then the response “Aah, Inglés!” Lots of sign language, pointing directions, followed by a thumbs up, a smile and us replying “Obrigada!” Invariably, there is a dismissive wave of the hand saying, “Na Da!”

Thus began our trip to Brazil. Just as the pilot made the descent announcement and the windows opened we were greeted with the deep blue waters of the Atlantic. Scattered around were forest covered islands.

It couldn’t have been a better beginning for our round the word trip!

But the euphoria was felt only as hindsight. There were numerous details to take care of before we could let all of this sink in. Immigration was a breeze, but our travel cards didn’t work at the airport (or so we think, the instructions were in Portuguese!). Several of the above exchanges led us to the “airport express bus” to take us to our Couchsurfing home in Sao Paulo.

The almost hour long journey began. It was only then that we realised, “Wow, we are after all in Brazil. Finally! It has actually happened!”

Family in Sao Paulo, thanks to Couchsurfing 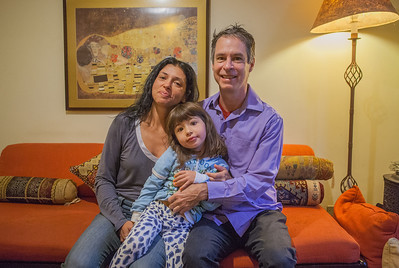 In all the newness that had engulfed us, the only thing we knew for certain was that a couple, Steven and Patricia had accepted our request and were going to host us in Sao Paulo. Steven offered to pick up at the metro station. How amazing having someone receive us in this far away new country!

They welcomed us into their home, a cosy little paradise, filled with love and people! Steven introduced us to his wife Patricia, daughter Louana, her two grannies, the two cats and two dogs, all of whom lived into what would be our home for the next few days.

The house was more of a lesson in responsible living. Sao Paulo was going through its worst drought in over 60 years. Steven and Particia had made every effort to conserve water in their house – water harvesting, recycling of water, even considering shifting to a more water conservative washing machine!

The neighbourhood had a very socially responsible people. “Occupy open space”, a movement to put the gardens and green spaces for the better use of the citizens was gaining momentum in the city. As part of this initiative, Steven and a few of his friends had organised a Sunday morning picnic in the local garden.

He was kind enough to invite us for this picnic. It was a beautiful sunny day. The park was filled with people engaged in all sorts of colourful activities. Trampoline and swings were set up. Some families had got props for story telling. There was a table full of fresh, healthy food. Adults were busy in building a community dining table as a permanent fixture in the garden.

Sao Paulo, and specially the area we were living in, Vila Madelena, is the graffiti capital of this region. Specially a winding street called “Beco do Batman” (Batman alley!). We (and everyone we asked) have no idea where the name came from!

It is walls and walls filled with beautiful (and some trippy) street art. Done by some amazing Brazilian artists (They are not just anyone, they are all moralists, with a message in their art, we were told). Once an artist makes his art, that space becomes his. No one else can then claim that spot. 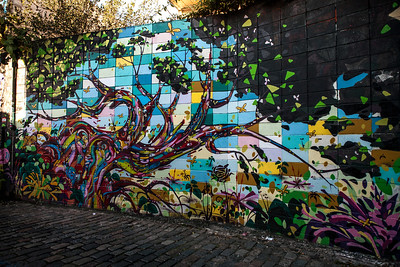 Not surprisingly, this alley attracts photographers from all over. Some even get their clients here for photo shoots.

We imagine a whole bunch of models would have had their first ever photo shoot at Beco do Batman.

Around the same area, they have art galleries exhibiting and selling works of these artists. The galleries are open for all to enter and have a look.

This is the area to go to for your share of fresh organic food, boutique and kitschy shops. No faceless large stores here. Each shop is tastefully done up, with a character of its own.

This is also where all the bars are. It is an entire block full of them. This was the go to place during the football world cup (of course here, you only call it the world cup, and yes, they still hurt over the remote hint of 7-1). We could only imagine what the place must have looked like, a street full of football crazy fans (or should we say worshippers?).

One particular bar, is more like a football museum. Each wall, table, even the ceiling is lined with photos of football matches and players. The server there greeted us with “India? Don’t you guys play cricket there? Welcome to Brazil, have a good time here!”

A funny thing happened in our first couple of days in Brazil, walking through the streets of Sao Paulo. At any intersection, a car would wait for us to cross and we would almost always think that the car at broken down. Being so conditioned to “running for your life” while crossing roads, this was our first big cultural shock!

We weren’t surprised at all by this claim. Each day we spent in Sao Paulo, we learnt of a new museum here.

How many cities claim to have a museum of their national language? Yup, that’s right!

There is a museum about the Portuguese language here! We were intrigued by this concept even before we went there, but the presentation and the art there totally took us by surprise.

While the exhibits were all in Portuguese, we had Teresa showing us around that day. We learnt about how and why Brazilian Portuguese was different than the Portuguese spoken in Portugal. Also about how the various African, native and the other European influences had made the language here richer and all encompassing. There is also an audio presentation with recitations of some famous Brazilian poetry. A teary Teresa told us heaps about the sense of pride and love the Brazilians feel toward their language.

Another museum we visited was the Itau Cultural. This was conceptualised, created and is maintained by Banco Itau, one of their biggest banks here (yeah, a bank and museum go together!). They made it to preserve the art collection that the bank had and to tell the story of Brazilian history.

We had planned to stay in Sao Paulo for not more than two days. We soon realised that just wasn’t enough time. The city had a lot more to offer and we needed at least a week’s time to do justice to the expanse of São Paulo. Wellington beyond the tourist attractions

An extra day in Wellington meant we could see parts of the city beyond the Wellington waterfront. We started our exploration with the Botanical garden. It was at a walking distance from Darci’s house through the Tinakori road. Heritage homes on the Tinakori Road Many homes had the board “Thorndon Notable Home” on their front

8 thoughts on “Sao Paulo, Brazil and the beginning”