Play Pause Unmute Mute
Rio de Janeiro, the city of the sun and the sand welcomed us with heavy rains! But there is so much this city has to offer, that rains weren’t a dampener at all. This is a quick snapshot of what we did in the rainy yet marvellous Rio de Janeiro.

We started from the top. Christ the Redeemer or Cristo Redontor

The statue of Christo Redontor is on top of the Corvocado mountain. A funicular train, Trem Corvocado, took us through the Tijuca forest – an Atlantic rainforest to the top. As the train climbed through the forest, we got panoramic views of Rio de Janeiro. We realised its special characteristic – a well developed concrete city, with the oceanic coast on one end, and mountains on the other. It was hard to believe that the dense forest we were crossing was right in the middle of one of the most famous cities of the world!

The statue by itself is imposing to say the least. 32 meters tall, on a pedestal of 8 meters, with his arms wide open, it is a massive structure embracing you. Come one, come all! I am watching you, you have all my blessings, he seems to be telling the city of Rio de Janeiro. It was something like seeing the Taj Mahal, you may have seen a thousand pictures, but standing in front of it, at touching distance, the enormity of not just the structure, but also the reputation of what lies in front of you hits you.

May we present to you the Atlantic coast with – from left to right – Copacabana, Ipanema and Leblon beaches! This was one of the views from the top!

And the view of the Sugarloaf mountain, another landmark of Rio de Janeiro from Cristo Redontor. 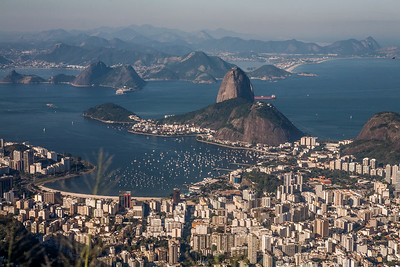 You will meet people from all the nationalities here. This is probably the only place you will see people clicking selfies with Jesus Christ!

Atop the Corcovado mountains, at the foot of Christ the Redeemer, seeing the sprawling city of Rio de Janeiro under us, and the blue waters of the Atlantic ocean spread right upto the horizon, we came face to face to how far away we were from what we had left behind. For the first time, we felt that yes, our journey into something new had actually begun!

Our tour guide, Louana was the founder of this company. She herself had an interesting story. While on a trip to Ireland as a student, she explored much of the country through the free walking tours there. On returning to Rio de Janeiro, she was disappointed to realise that there weren’t any free walking tours in this beautiful city. That’s when she grabbed the opportunity and started this company, which really is her gift to the travellers coming to Rio de Janeiro!

This is the headquarter of Petrobras. When the building was completed, it was voted amongst the ten ugliest buildings in the world! (The building might appear familiar to the people of Mumbai!)

The downtown of Rio is a charming area to walk around, lined with old colonial buildings which were residences and business houses of the people form Portugal when they first arrived here, cobbled streets and small cosy cafes.

In the Imperial Palace we saw some old pictures of Rio, from when the Portuguese had just arrived. How they mingled with the natives, the excitement that Brazil felt when the royal family from Portugal moved to Brazil was all very surprising. We realised that the imperialism of the British was very different than the imperialism of Portugal. In fact, unlike most other nations where the independence day of a country is when they become a democratic republic, the Independence day of Brazil signifies the day it became an imperial power. The day the king of Portugal became an emperor – king of Portugal and Brazil.

Rio de Janeiro is home to the largest library in South America, which was under renovation.

This was in tune with much of the rest of Rio de Janeiro. The city is right now a place under some major renovations. It is gearing up for the mega sporting event – Olympics 2016 that Rio de Janeiro is going to host. Roads are being broadened, new sports infrastructure is developing on the beaches and they are trying to streamline the traffic. The football world cup was like a trailer and they have learnt a lot from it about hosting a global event of this scale.

Our tour ended at the Selaron steps. These colourful steps are iconic to Rio de Janeiro. Selaron, an artist from Chile is the one who started this tile work, however, he ran out of supplies. After Brazil won the football world cup in 1994, people started contributing towards this project by contributing tiles. Word spread and people from all over the world started sending tiles for this artwork. The most expensive tile here is a handmade one from Iran, it costs around USD$ 2000! Shiva, Sai baba, Saraswati, Laxmi, Balaji adorned the tiles from India.

This place is quite a phenomenon. It attracts tourists from all across the world. Even the Cariocas take pride in it. The colourful explosion of these steps ends in a tiled flag of Brazil at the top. Street artists and musicians display their art here. These Selaron steps have a groovy, vibrant vibe here, which we realised was more like a melting pot of Rio. 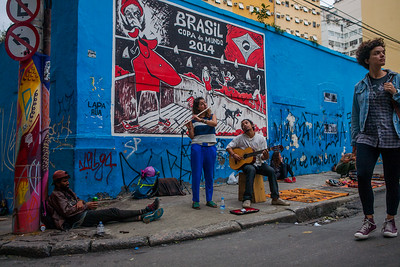 We love free walking tours. They are the first activity we seek out in a new city. They’re a such an immersive way of making friends with the locals as well as fellow travellers in a new city. And the guides can be your point of contact for advice or in the case of an emergency.

Another handy way to make friends is to join any local activities – learning how to do the forro or make a wicked caipirinha! We would’ve loved to learn Portuguese in Rio de Janeiro, Brazil.

First visit to a Pria in Brazil

Our first beach in Brazil was the non-touristy Barra da Tijuca. We got off the bus at Pria (Portuguese for beach) and were stunned by layers of endless white and blue that lay before us. Never before had we seen the water so blue or the sand so white. It was all too overwhelming.

With hardly any people around, we had almost the entire beach to ourselves. We went to the water and dipped our feet for the first time in the waters of the Atlantic ocean. It was a magical albeit cold moment. We spent many hours at the beach, just lying around and admiring the beauty before us.

There were some wave surfers trying to catch the wave. And of course, some youngsters practising their football skills. 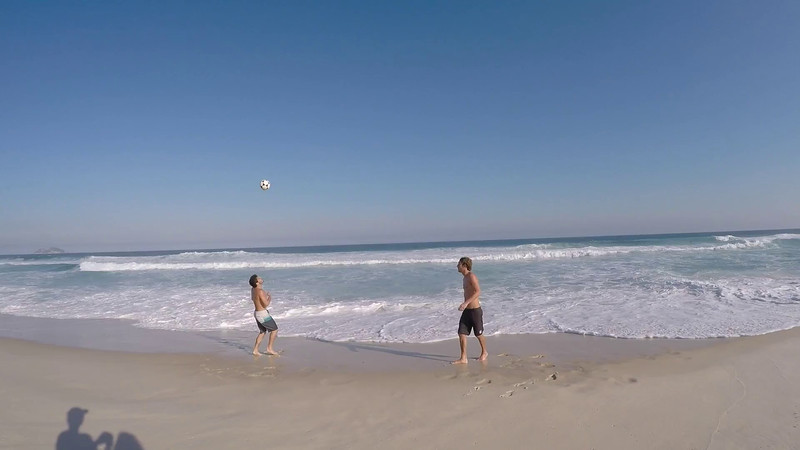 No visit to Rio is complete without actually setting foot on the legendary Copacabana and Ipanema beaches. Because of the rains, it took us a few days to actually get to the beach.

Copacabana was phenomenal! It is not just about the sand and the water here (which we couldn’t go into, it was just too cold for us!).

Walking down a beach is a first-hand experience of a paradox, on one side you have the thriving beach action. But a couple of minutes away, crossing the road are offices and commercial establishments. On one hand are men dressed in shorts, women in their tiny bikinis, on the opposite are people dressed in a formal office attire. On one hand, people are exercising in the open air gyms (which are free for all along the entire stretch of the beach), playing games of football, volleyball or some ingenious games of foot-volley ball or fresco ball, on the other they are all running to their office or towards the nearest metro station. These beaches define the life here in Rio.

Area around the Ipanema beach was an explosion of colour and activity. Cyclists, joggers, skaters and artists displaying their creations at the Osario square weekend market, even in the far from perfect weather, everything felt just right! People here, like the rest of Brazil, are as friendly as they get. Friendliness is an identity of the culture of Brazil! Rio de Janeiro might be a big busy city, but everybody will try and help you. In the bus, passengers will have a nice chat with the driver before heading to their seat. In shops, everybody has a friendly conversation with the cashier when she is billing your purchases. No blank stares here for anybody.

We experienced this when we were looking for a football club and couldn’t figure out which turn to take from our Google maps. We asked a cab driver for directions. He didn’t speak English, and our Portuguese hadn’t moved much ahead of Obrigada. But he got out of his cab, and without any hint of “come, let me take you there in the cab”, only pointing left and right, he gave us the exact directions to the football club. We could see it in his eyes, that he had taken it as his personal responsibility of making sure these 2 lost English speaking visitors to his beloved Rio de Janeiro reach correctly to their destination!

Like this story? Let us know in the Comments section below.

You will enjoy these stories from our travels in Brazil: