The kids of the hills…

The people you meet on the road are the most impactful part of any travel. Especially the kids. Times spent with the kids are some of our fondest memories.

These pictures and their stories are our attempt to introduce everyone with some of them.

…Are talented and eager to stage a performance! 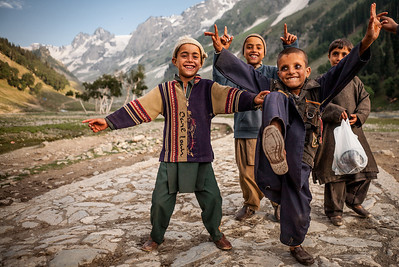 We met these Gujjar kids on our way to the Thajiwas Glacier in Sonmarg.

Gujjars are a nomadic tribe of shepherds.They move up to the greener pastures in the hills in summer. Come winter, the move down to the plains with their entire households and flocks.

Due to this lifestyle, the children usually miss out on conventional schooling.

These children had attended a nomadic school in Kashmir. As proof, they recited to us the alphabet, numbers and also some song and dance. They were happy to receive chocolates as their reward.

…Are ingenious and inventive. Engineers in the making? 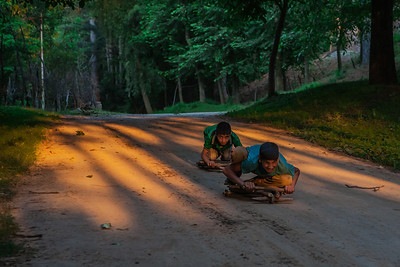 No fancy gaming consoles. Just a wooden plank and a few rods. That’s all that’s needed when the woods, clean air, and open spaces give you company.

In this picture are two friends, Rohit and Owais. They were from the village Pingwan near Achabal in Kashmir. This ground surfing game was their daily evening activity.

…Are a delight to shoot – Not at all camera shy! 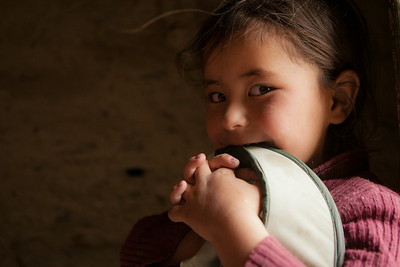 It felt like modeling was in her blood. Her spontaneity and ease in front of the camera made her a pleasure to shoot. She was posing as if it was a routine for her.

She lived in the little hamlet of Rangdum, on the way to the Zanskar valley. Inspite of the remoteness, her natural response to the camera was surprising and endearing.

…Are innocent and lovable 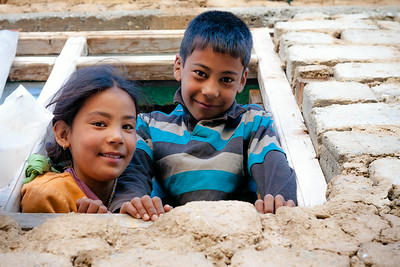 We saw these kids peeping out of their house on a walk around Drass. It is a small town near Kargil in the state of Jammu and Kashmir, India.

What makes Drass prominent is that it is the coldest town in India. It is also the second coldest permanently inhabited place in the world, after Siberia.

Cold or not, siblings share a special chemistry irrespective of their geographical settings. This brother-sister duo was innocence personified.

…Are naughty and love playing games! 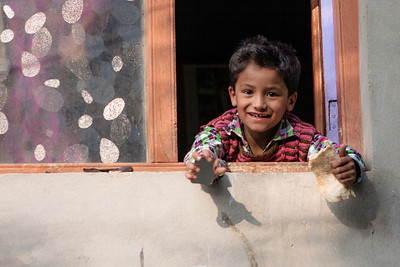 We met him in Goma Kargil, which is a small village higher up from Kargil.

He was playing the mirror game – casting a reflection of the sun on the ground. The light was what caught our attention.

Mischief sure has no boundaries!

…Share a universal love – hate relationship with their siblings! Their parents ran a dhaba (food shack) in Naukuchiatal which is a small lake town in the state of Uttarakhand in India.

We had dinner at their dhaba the previous night. That night the sisters Ashwini and Sarita were very shy.They didn’t at all look at the camera.

The next morning we went there again for breakfast. This time they had warmed up to us. They even played with us while we ate. And then gave us some fun filled shots.

…Are just too darn cute! 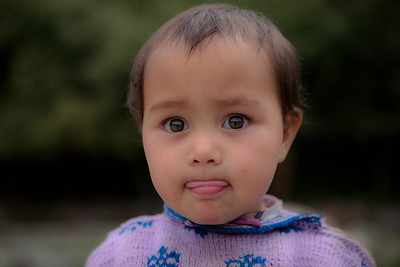 Anjum and her cousins were also visitors to Drass, like us. They had come from Srinagar, to escape the heat, where the summer was at its peak.

Drass, is the second coldest inhabited region in the world, with temperatures plummeting below -40C in the peak winters. However, in the summer months, it enjoys a pleasant weather throughout the day.

…Are sometimes on their way to becoming monks! 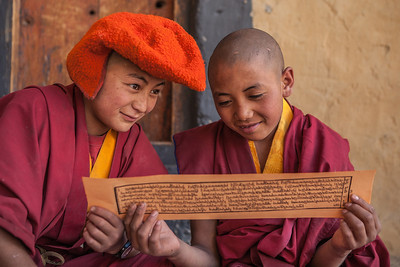 Should we call them monks or kids or kid monks?

It was break time for these youngsters. Their energy was un-missable. Take their maroon robes away, dress them up in clothes for “young adults” and they could pass off as school children in a playground.

Except, that, they WERE in their maroon robes, attended the monk school in the Phuktal monastery, studied ancient scriptures and would go on to live their lives devoid of all worldly possessions!

…Have above all, cracked the secret of being happy in the middle of absolutely nowhere!! 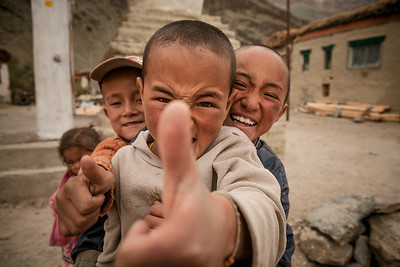 Rangdum is a tiny hamlet with maybe ten houses. It has a couple of food stalls (travelers usually halt here for lunch on the journey to Zanskar) and a couple of guest houses (for travelers who want to halt for the night).

A monastery is housed on a hillock, 3km away from the village.The village is essentially a definition of “in the middle of nowhere”.

These kids were playing near the stupa when our trucks halted for lunch. We wondered what their lives must be like, living in such isolation.

From what we saw, it sure seemed like a lot of fun!

You would also like these stories People we met while Traveling:

Want to travel to Kashmir? These stories will help you plan your trip to Kashmir.

Pilgrimage at LOC: A privilege and a paradox

Going so close to the LOC itself was stuff wild dreams are made of. In a region filled with so much uncertainty, to experience the common bond of heartfelt devotion – it was a paradox we had the privilege to witness.