That in a nutshell was our tour of Salar de Uyuni, the salt flats of Uyuni, the biggest salt flats on earth. The reason most travelers venture to Bolivia – the tiny country, smack in the middle of the South american continent. It is not an easy country to get to (or travel through!). But oh-so-worth-it!

First things first. It is important to understand that –

Before we knew, we were out of Tupiza and into the mountains. Not mountain roads. Right from the start, we realised that in the next four days, we would be seeing few roads.

The mountains were all shades of browns and reds. It was a sea of red all around us. Only humans around were in a few other vehicles carrying travellers like us.

Giant cacti, and the furry alpacas were the only exception to the bareness around. Our rate of seeing any human settlement was around one village every hour. The number of houses in these villages could be counted on our hands. The people here were mostly all lama herders.

When we asked Filipe where they got their supplies from, he said they had to drive to Tupiza. And water? We never found the answer to that.

Another thing we couldn’t stop wondering is why would someone continue to live here? Nothing that human life needed came easily here – food and water were distant. The weather was harsh, cold and windy. Zero access to any present comfort. And hardly any people around! The only reason we could think of was, “this is home”.

By evening, we reached a village called Pueblo Fantasmo, ghost town. We had gained over a kilometer in elevation, and everyone was starting to feel its effect. We were all asking each other, “Are you feeling giddy?”. A fitting question to ask in a ghost town! 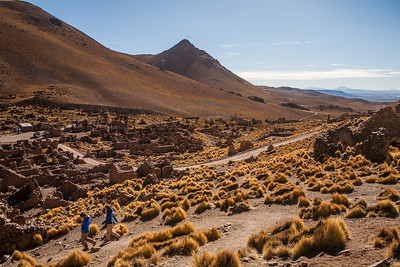 Pueblo Fanatsmo, once upon a time a flourishing mining town, saw its end when a woman contracted an unknown disease. This, and an apparent curse was the beginning of its end. This confusing story was told to us in Spanish, by a voluntary guide. Some fellow travelers translated it in English. All we know for certain is that no one lives there anymore! 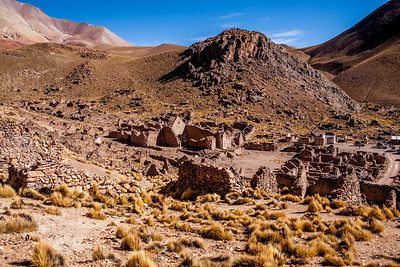 By now, we are all walking extremely cautiously through the ruins of Pueblo Fanatsmo. From whatever was left of the stone structures, we could imagine a once beautiful church. Remains of houses were strewn around. Each step now was starting to feel wobbly due to the rapid gain in our elevation.

After Pueblo Fantasmo, the elevation gain continued. Our car also had its first river crossing. At a lake called Laguna Morejon a board confirmed we were at 4855 meters above sea level!

Here, we had our first major encounter with the fierce winds. Our thick trousers were fluttering like flags.

Day 1 of our Uyuni salt flats tour ended inside the Eduardo Avaroa National Wildlife Reserve. The Chilean border was close to us on the west and the border with Argentina to the south. Proof of proximities to these international borders was a military base inside the wildlife reserve!

Uturuncu, the only active volcano in Bolivia now kept us company. The golden light on its snow capped peaks (the highest in Bolivia, at 6000 meters) gave way to pitch darkness.

The second day of our Salar de Uyuni tour began with a walk over some high altitude ice. 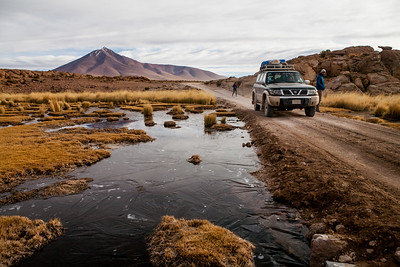 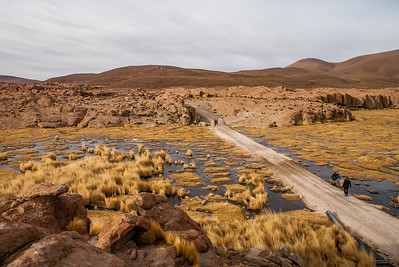 We were now driving through a desert, aptly named the Dali desert. Filipe confirmed that the name was inspired by the works of Salvador Dali!

Next, were a series of colourful lakes. White lake, rich in borax. There were thermal springs here. But we refused to get out of our layers of clothing.

Green lake, with cobalt and arsenic traces. Around noon, when the sun is overhead and there is enough wind (which there certainly was!), the minerals get agitated enough to reflect and green colour! This is the famous Laguna Verde of the tour of the salt flats of Uyuni.

The red lake was due to certain algae in its waters. Its colour most prominent at dawn and dusk times.

We were clearly on a “bizarre overdose” by now. Add to it the mind games that altitude plays to the tunes of howling winds. The landscape “virals” that we had often dismissed as “too photoshopped to be true” were beginning to be true!

And then we saw these high altitude sulphuric geysers. Yellow and black boiling mud in rocky pits. Vapour and even geysers spurting out from some. The smell of rotten eggs, reminiscent of sulphuric acid experiments in the Chemistry labs of schools wafted through that thin air. As if all of this wasn’t alien enough, in the far background, over the horizon, there were snow mountains! 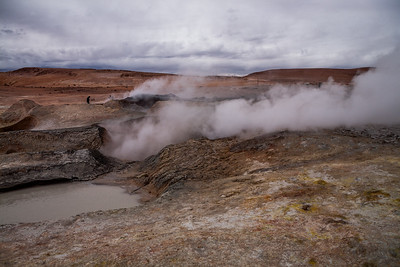 More wind, more high altitude all terrain travel. The regime to step out of our vehicle had now been set. Wear gloves and caps. Zip up all the jackets. Put your hands in the pockets. Expose as little as possible to the elements. Only then, step out and brave the wind.

The landscape and the wind were playing a game of one-upmanship. Who proves more powerful? Does the wind force us to stay inside? Or the landscape compels us to step out? 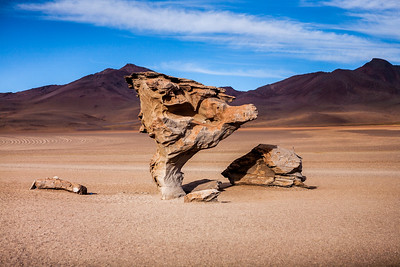 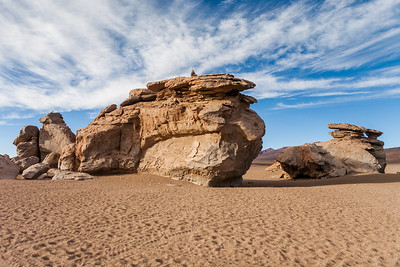 On day 3 of our Uyuni salt flats tour, we got to see the elusive Chilean and Andean flamingos at close range. Shy birds that they are, they had flown away deeper into the lake every time we had seen them before.

For lunch, we took shelter in a rock, which just about stopped our food from flying away! 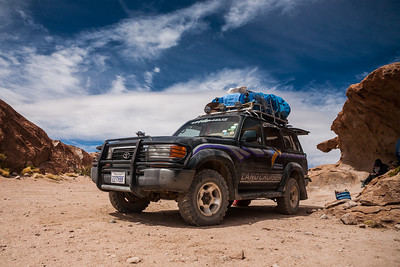 Early morning start at 4 AM (Filipe’s words: “I will be leaving with or without you!”) ensured us enough time to get in position for the sunrise. Paying the fees at the entrance of Incahuasi, the only inhabited island of the Salar de Uyuni and climbing up to the top takes some time. The short climb also made us warm and charged up.

The scene from the top was unreal. Spread out before us, all the way to the horizon in all directions was salt and nothing other than the salt. The Salar of Uyuni is huge! Driving through it, one doesn’t get the idea of its expanse. Seeing it from this vantage point, we got a real glimpse of how huge it was.

Daylight was just breaking out. And the white salt was slowly turning a shade of pink. As was the sky! We couldn’t differentiate where the Salar ended and the sky began into the far distance. 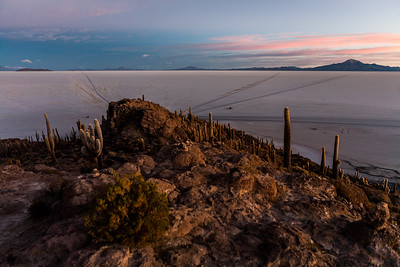 Everywhere there were huge, the biggest we have ever seen cactii spread out on the island. Some of them, several meters tall!

Through shades of pink, orange, yellow and gold, the sun rose over the Salar the Uyuni. We could now see every single thorn of the cactus glittering in the tender sunlight. 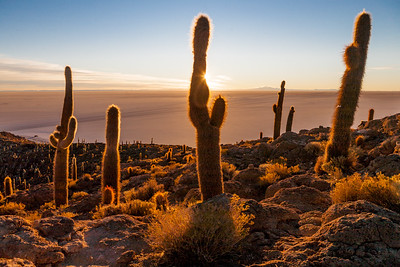 As the sun came up, the colours of everything started to change. The sky was now turning a bright blue. 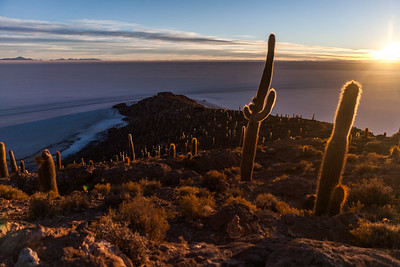 Seeing the sun rise over the sea or the mountains is kind of familiar territory. But to see the sunrise
over an “island” on the Salar de Uyuni, with nothing around but salt flats! There was something captivating about those whites and blues.

That morning, we had a special lavish breakfast of cereals, bread, yogurt and cake, right at the edge of the Salar de Uyuni. All this on a salt table. We sat on our salt benches and devoured our breakfast admiring the salt flats before us. 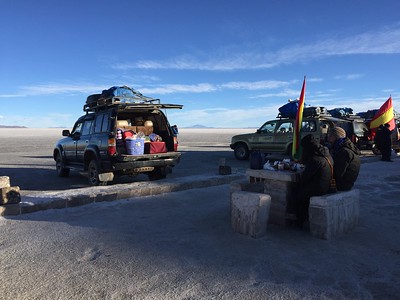 We then proceeded deeper into the Salar de Uyuni. The sky was a bright spotless blue. And the Salar – you couldnt look at it without your sunglasses on! White and only white, it was now reflecting light like a mirror!

When you do the Uyuni salt flats tour in the summer, the Salar is almost covered in water. That is when you get the seamless reflection views. Winter time, the Salar de Uyuni is dry – and flat. Which sends perspective out for toss. 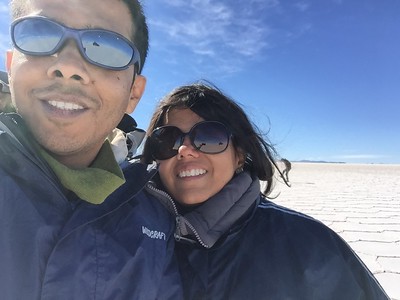 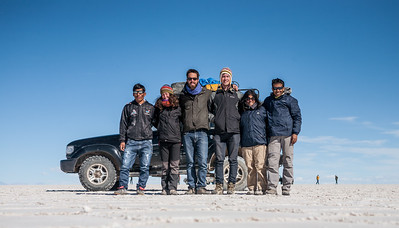 We did a quick round of the now rightly shut down salt hotel on the Salar.

After four days, we were now returning back to civilistaion. And we neared the town of Uyuni, the landscape changed drastically. Roads made an appearance. There was also a train cemetery on the outskirts of Uyuni, which had smartly been turned into a “tourist attraction”. 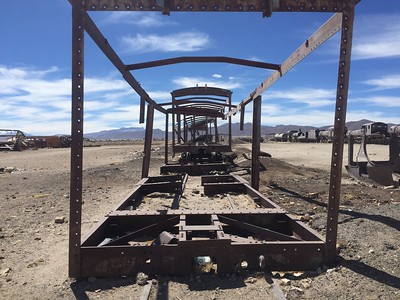 Truth be told, we were not yet prepared to accept this sudden human interference. Out hearts and minds were still in those “middle of nowhere” land that we had just crossed.

The end of our tour was something of an anticlimax. Uyuni was a dusty little town. We had the last lunch of our tour here.

We had spent just four days together. Our paths might or might never cross again. But we had shared the most incredible days of our lives with them.

The Salar de Uyuni tour had definitely been the highlight of our travel lives so far. And our companions, Pedro, Daletta and Joe will forever be a part of it!

We were filled with gratitude towards Filipe for making it all possible. It was tough for us to convey of our emotions without speaking any Spanish. But some things are beyond words and Felipe probably got that.

Throughout the four day tour of the Uyuni salt flats, we hadn’t seen a single direction sign or landmark. Yet, driving through the desert, with only the mountains and lakes for help, Filipe hadn’t taken one wrong turn. We could only attribute this to him being an exceptional driver.

For sure, when we had asked what his favourite part of the Salar de Uyuni tour was, he had instantly replied, “the drive”!

To drive along the tour of the Uyuni salt flats, we realised the drivers needed not just good driving skills, but also strong endurance. At the end of the day, when we would be resting, all the drivers would be preparing the car for the next day. Unload everyone’s bags and the kitchen stuff. Then refill the fuel tanks with spare fuel that everyone carries. Check the tires and the engine. Do whatever minor repairs need to be done. All this after having driven through back breaking terrain for the entire day. We had a new found respect for Filipe and all his counterparts.

Food and stay during the Uyuni salt flats tour

The Salar de Uyuni tour had fulfilled all our wanderlust yearnings

Before the start of the tour, we had imagined the Salar tour to be a relaxing experience. Everything was going to be taken care of, we didn’t have to worry about a thing. Sit in our 4WDs and be driven around. How hard could that be?

How naive we were! The tour of Salar de Uyuni gave us a good lesson, that in front of harsh natural conditions, man made comforts mean nothing. Just the severe cold and the high altitude had tired us out!

When wanderlust strikes, you yearn for drives through endless nothingness. For places that seem too good to be true. Your yearn for the mountains, the rivers, the desert. Our tour to the Uyuni salt flats had given us it all!

Other exciting journeys we have been on