Dispatch #25 – What’s beyond these mountains?

How much time is enough time? When your heart says it’s time to move – it means you’ve had enough time. When the flower-filled meadows didn’t tug our heartstrings, we knew we were ready to leave the valley that had welcomed us with open arms, a valley that we had called home for over a month.

From Gulmarg, we went back to Srinagar, in the same far away from everything homestay. Went to the Dal lake for one last view, enquired at the taxi stands and decided to cross this lush green valley and see what was beyond the mountains.

An early morning start from Srinagar and an uncharacteristic low Amarnath traffic meant we Sonmarg easily for breakfast. From here on we started climbing up. The basecamp of Baltal, where we had spent a night after our Amarnath yatra, looked tiny from the road up above.

And suddenly, like a curtain-raiser reveals a swanky new stage, we felt like we were seeing some new mountains. The greens had disappeared. The lush deodars and the smiling flowers were nowhere to be seen. These landscapes could not be called pretty or beautiful. The only thought we managed to have at the time was, “Oh wow” – just that.

Zoji la – well, we started to breathe normally only after we were beyond it. The mountains, these Himalayas that we had thought we had gotten to know so well were revealing new shades and we were in awe!

Were we ready for this new experience?

We decided to make Drass our first high altitude stop. We got a decent room in the tourism guest house for 500 INR.

A local bus was just leaving. We got into it and asked where it was going.

“Wherever this bus goes. Will this come back to Drass?”

Cool, let’s acclimatise to this new town, new mountains and a sudden new landscape through this bus.

In some time, our fellow passengers told us we could visit the Kargil War Memorial if we got off there.

This space isn’t enough to say what it felt like to be there. But the sight of the tricolour in front of the imposing Tololing mountain range – thinking of it still gives us goosebumps.

Another bus came by. It took us to a place called Bhimbet – a massive rock fabled to have moved itself to the other side of the village.

Two boys were playing cricket. Their cousins were all nearby. We asked them where Bhimbet was and they all took us there. We all got talking.

“Srinagar is very hot, so we have come here to our cousins for the holidays.”

From Shikhar Dhawan being the cricketing hero to a few words of the Dardi language – we learnt a lot from them.

One of the girls, Zaibon Nissa, is still the smartest child we have met on our travels.

“Do you have a notebook? I will teach you a few words. Write them down.”

Our first ever language lessons!

She is also the only child who has ever asked Chetan how to use the camera and managed to take pictures, holding the Canon 5D firmly in her tiny hands!

We got back to the guesthouse in an Indian Army jeep. Everyone we spoke to in Drass had a tale of their own, of “where they were” when the war began.

The sunset was magical – we had never seen clouds and colours like that.

Something – no everything, was different here.

Drass to Kargil was a short journey. We checked into a rather simple guesthouse (could’ve been a lot better) in Kargil. The reason we stayed on was that the guys who ran the place also worked with a travel company and one the first day itself gave us some super suggestions.

They suggested we walk away from the market up the road that leads to the famous Munshi museum. Further ahead is the village Goma Kargil. A typical farming community, everyone busy in the husking activity.

We picked up some brochures from the Kargil tourism office and for the first time ever heard of this valley called Suru, ahead of Kargil.

A new valley with public transport connectivity – no reason to not go!

The next morning we took the “majduron ki bus” (bus for the labourers) and went to Sankoo. Across the bridge from Sankoo is Kartse Khar (also Karche Khar) which, we were told, has the tallest Buddha rock cut statue in the world. Such a major landmark in such an unassuming village. We couldn’t help wonder why there was nobody there, why this wasn’t a famous monument (and so good for us it wasn’t!).

Back in the Kartse Khar village, we met a few locals who were delighted to see tourists. They couldn’t stop talking about the statue and even took us to climb a structure which was supposed to be a palace.

“Do something so people know of this speciality in our village.”

So then, that’s what we are doing!

“If you leave tomorrow, you might be able to attend the Sani festival”, our guesthouse dude told us. We assumed he was mispronouncing sunny and made up our mind that this was summer, it had to be a festival celebrating the sun. Well – ignorance!

But that was all further ahead. How do we reach this Sani (sunny) festival?

“Buses go up to Parkachik. From there do something.”

This thing of “doing something” and “somehow managing” was back. Excitement set in!

The next day the “teacher’s bus” took us to Panikhar, ahead of Sankoo – the village we had visited the previous day.

And here we caught their glimpse for the first time. The Nun-Kun peaks – one always covered in snow, the other always bald. Never interchanging character.

The caretaker at the Panikhar guesthouse had agreed to make lunch for us while we wandered around. Post lunch, we waited for the last bus of the day to take us to Parkachik. All these bus timings were “what they said”, not written or official record. But all the information we received was spot on!

The roads had been smooth till then. Now the real stuff began. A rickety bus tethering to the edge of a gravel road. A valley spread out below. Our hearts in our mouths. For everyone us, just another day!

Saw massive changes in lifestyle as we moved deeper into the Suru valley. The wooden houses of the Kashmir valley had already given way to stone structures in Suru. The further we went, the size and style became simpler. Civilisation thinned. The beginning of Suru valley had been surprisingly green for this altitude, but now browns were starting to dominate.

We spent a couple of days in Parkachik, staying at the tourist guest house. A few more travellers (mostly foreigners) joined us the second day.

We went for a walk up the Parkachik la. Another sighting of the Nun-Kun. We were beginning to see what a basic life, driven by nature, meant.

We sensed the beginning of a new type of journey.

After a couple of days in Parkachik, we had to make a choice. Either be chicken and return to Kargil or figure out a way to move ahead towards the famed and elusive Zanskar valley.

The others in the guesthouse were also moving ahead. This time we would have company while heading to unknown unheard lands! How could we miss this?

We were told to go stand by the road (ha!) and wave at the passing vehicles. Jeeps leave Kargil early in the morning. So they should reach Parkachik by 8.30 AM. To be on the safer side, we took our positions an hour earlier.

It was us, an older Italian couple and a younger Spanish one. Another guy, Gulzar, had found space in a Maruti Omni carrying cargo.

A while passed, many jeeps passed, most were full, others didn’t wait. 15-30-1 hr passed and we were still just there. The people around started to tell us that all the vehicles heading that way would’ve passed by now, no point waiting. But what else was there for us to do?

There was a single jeep in Parkachik, he would usually take it to Kargil. He quoted an astronomical amount to take us to Zanskar. All six of us refused.

…To be continued (Part 7 here) 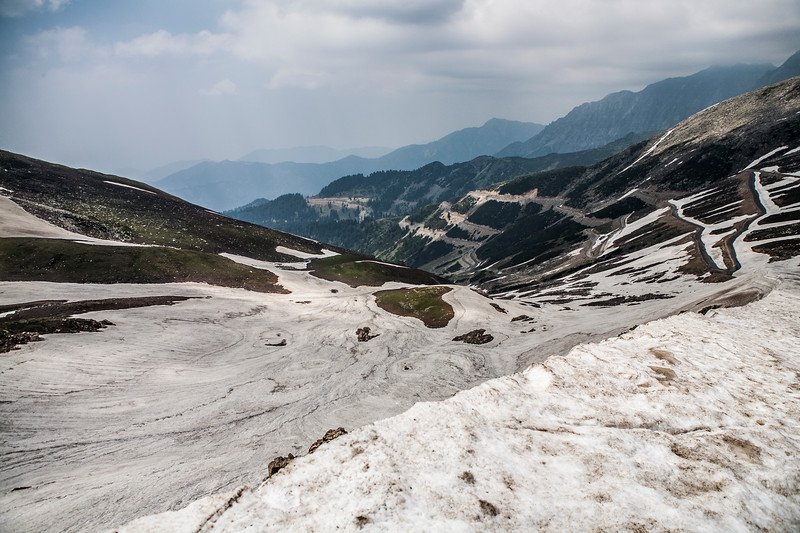