Exploring Garhwal Himalayas from the remote village of Raithal

Travel plans for our first visit to the Garhwal Himalayas in Uttarakhand were like they always are – non-existent. Hence, flexible. Because we were travelling without an itinerary, we were open to everything.

So how did we go about exploring the Garhwal Himalayas?

Choose a base, make a “home” – in our case, it was The Goat Village in Raithal 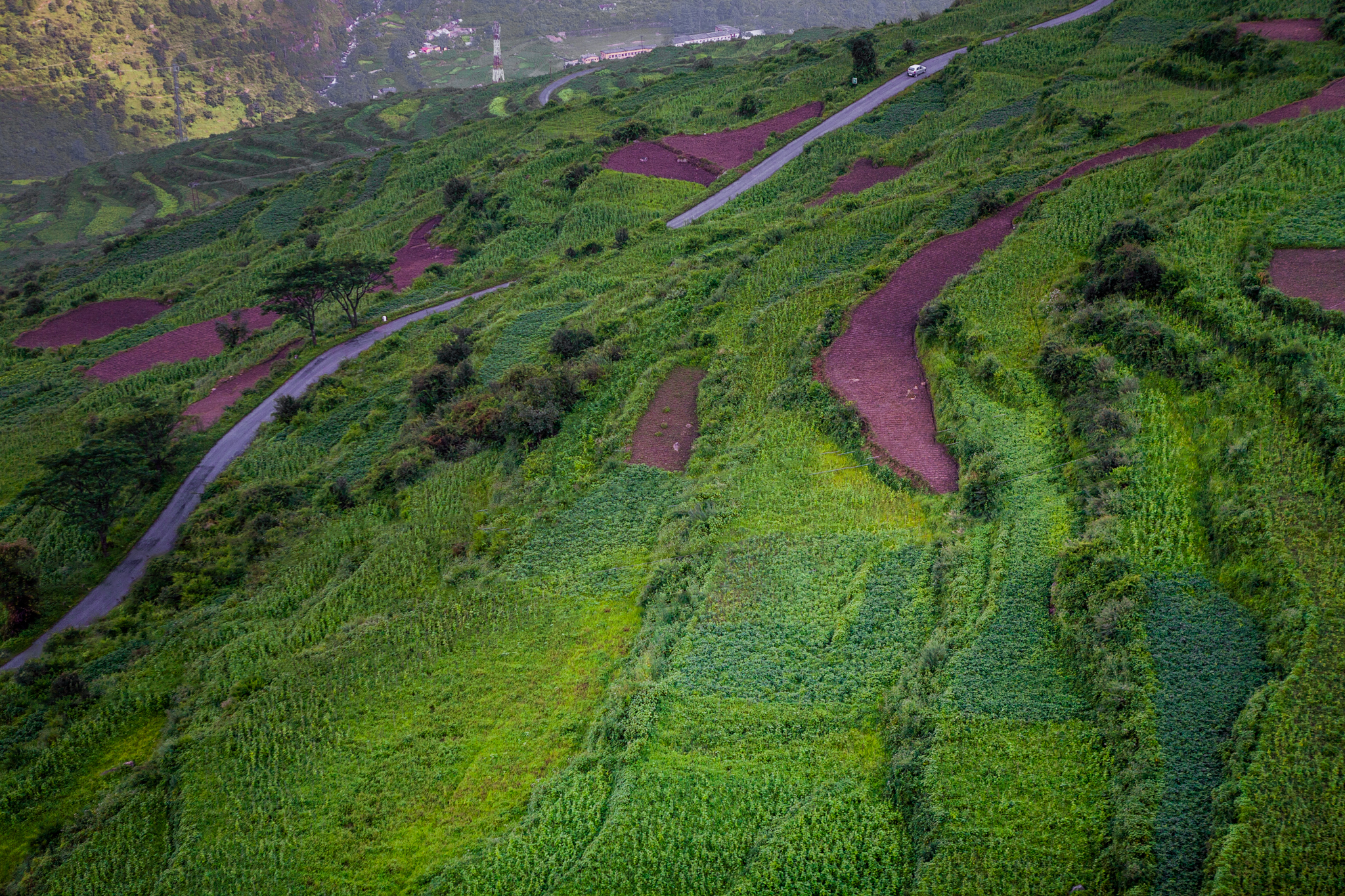 We used this base to explore the villages around Raithal – right from walks to the neighbouring villages to day-long excursions. Having a single base meant feeling we were “back home” at the end of the day. We were free from the hassles of packing and relocating every two days.

Why did we choose Raithal? Mainly because we fell in love with The Goat Village. But also because it was untouched by commercial tourism. The only options to stay besides The Goat Village were the locals’ houses.

It was sufficiently away from the big towns yet had limited but regular connectivity. There were around seven jeeps that the young boys of Raithal owned. Every morning they would leave for bigger towns like Uttarkashi and return home in the evening. We had to sync our schedules with these jeeps. A few trips up and down from Raithal meant we became well acquainted with all the drivers. If they spotted us in any of the towns around, they would let us know what time they were leaving! Yup, just like home!

Walk through the villages – observations and conversations 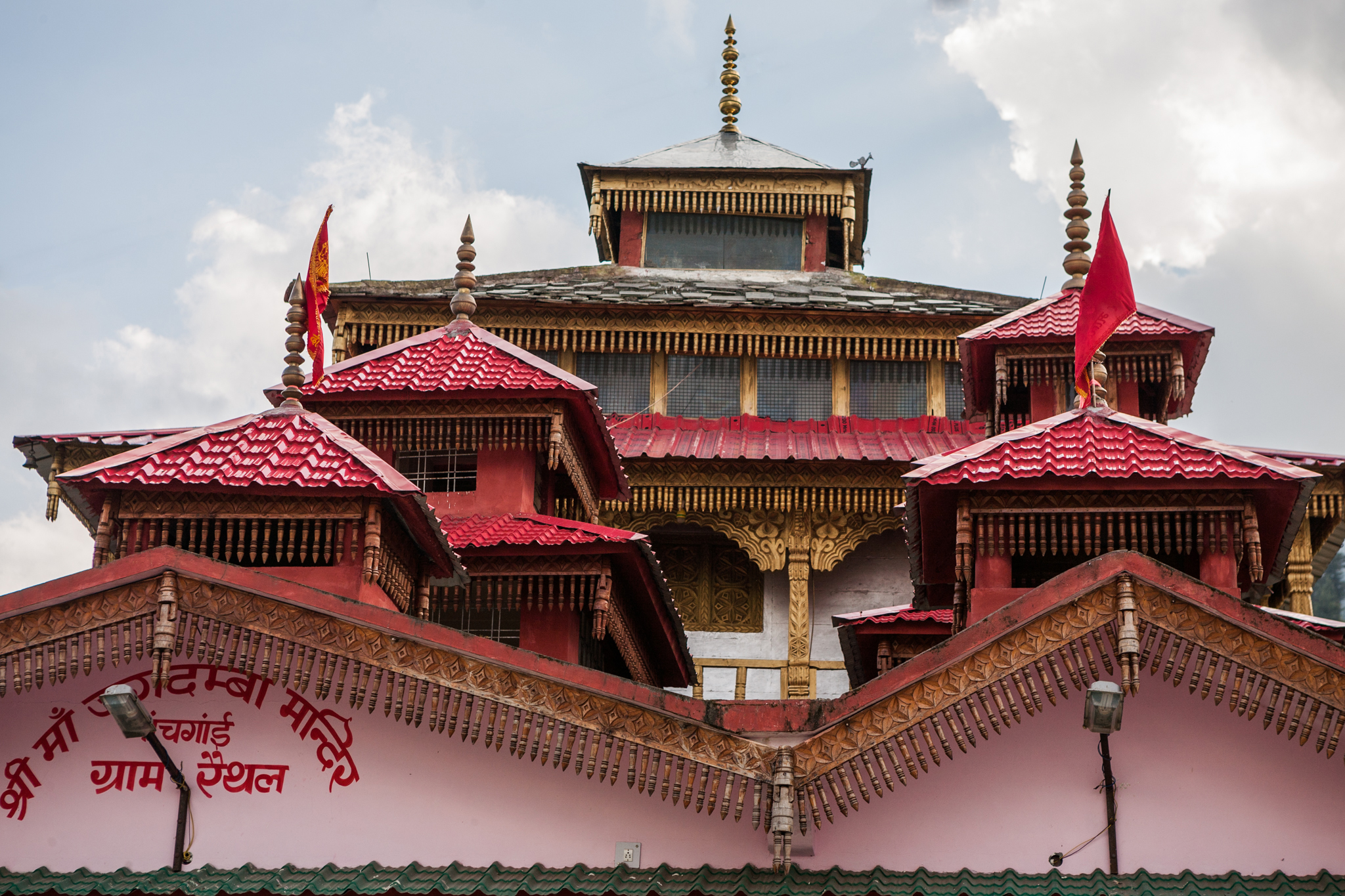 We explored the villages around Raithal by foot. This slow pace helped us understand the life in these Garhwal Himalayas. It revealed a lot about how the mountains are and what it means to call these mountains home.

And because we had based ourselves in Raithal, there was a sense of familiarity – many of the locals had seen us “do nothing” as we enjoyed our digital detox holiday at The Goat Village.

As we marvelled the carvings on the old wooden houses, wondering how people would have lived in these multi-storeyed structures, someone would join in to tell us how old the house really was. Who had built it? How long had it taken? Where had the wood, or the artists come from?

Conversations flowed. The people of Garhwal, unlike many mountain folks, were a chatty and curious lot. They wanted to know where we were from – and this one was a unique question we were asked in Uttarakhand – how much does it rain there. 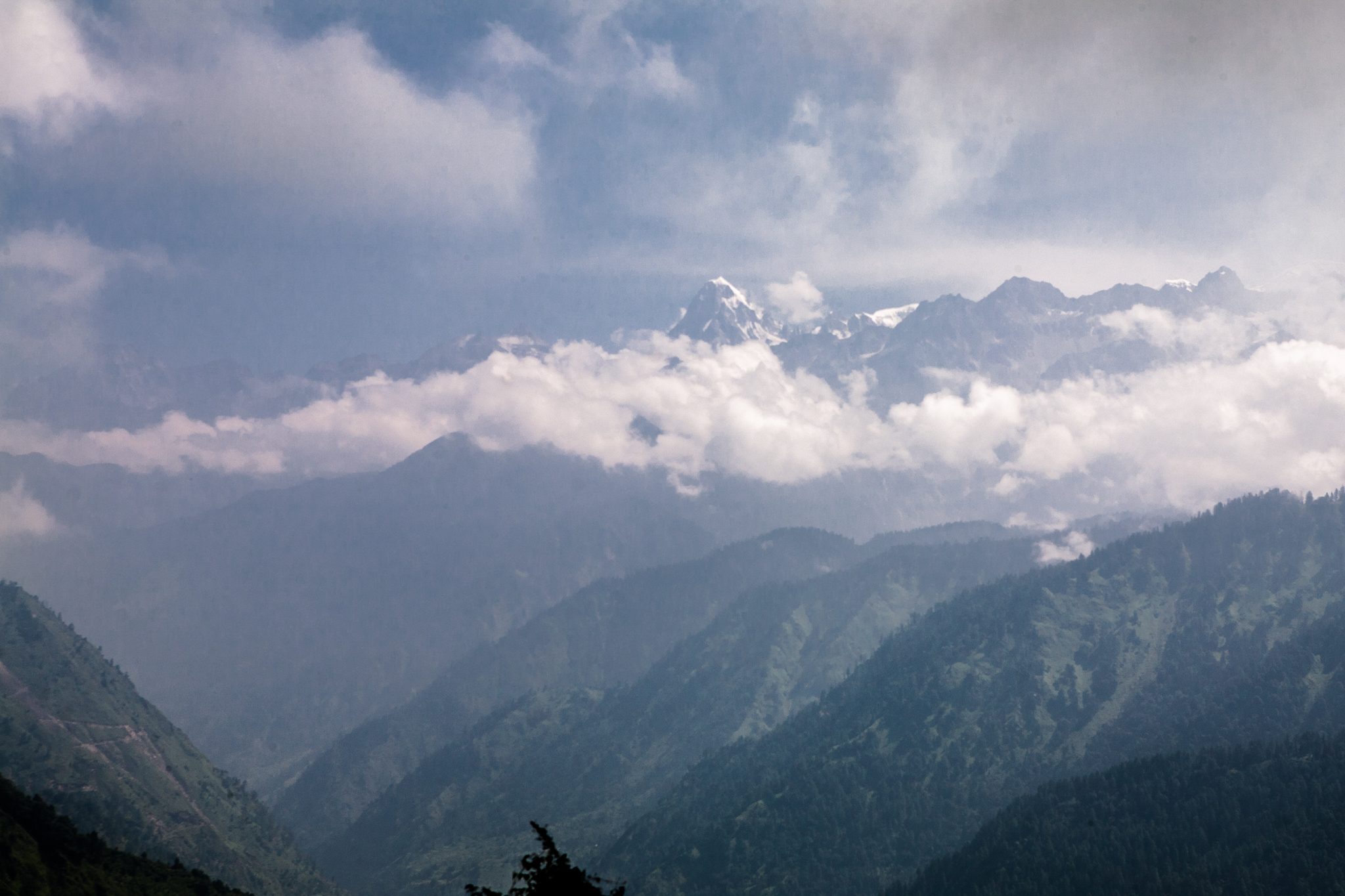 They told us how their cattle were all on a meadow high up, called Dayara Bugyal. “You must go there, that place is heaven.”

Another old man scolded us for making plans for a trek to Dayara Bugyal without having an umbrella. “It’s raining so much up there, can’t you see the clouds? First, go and get an umbrella, or a proper raincoat from Uttarkashi. You will die up there without one”, was the ominous warning he left us with.

A woman from the village named Dwari would meet us every day on her way to work in a government-run nursery close to The Goat Village. We would exchange pleasantries every day. She would ask us where we were off to for the day and give her suggestions – “Do visit that temple. You will feel calm, the vibe there is so positive!”. 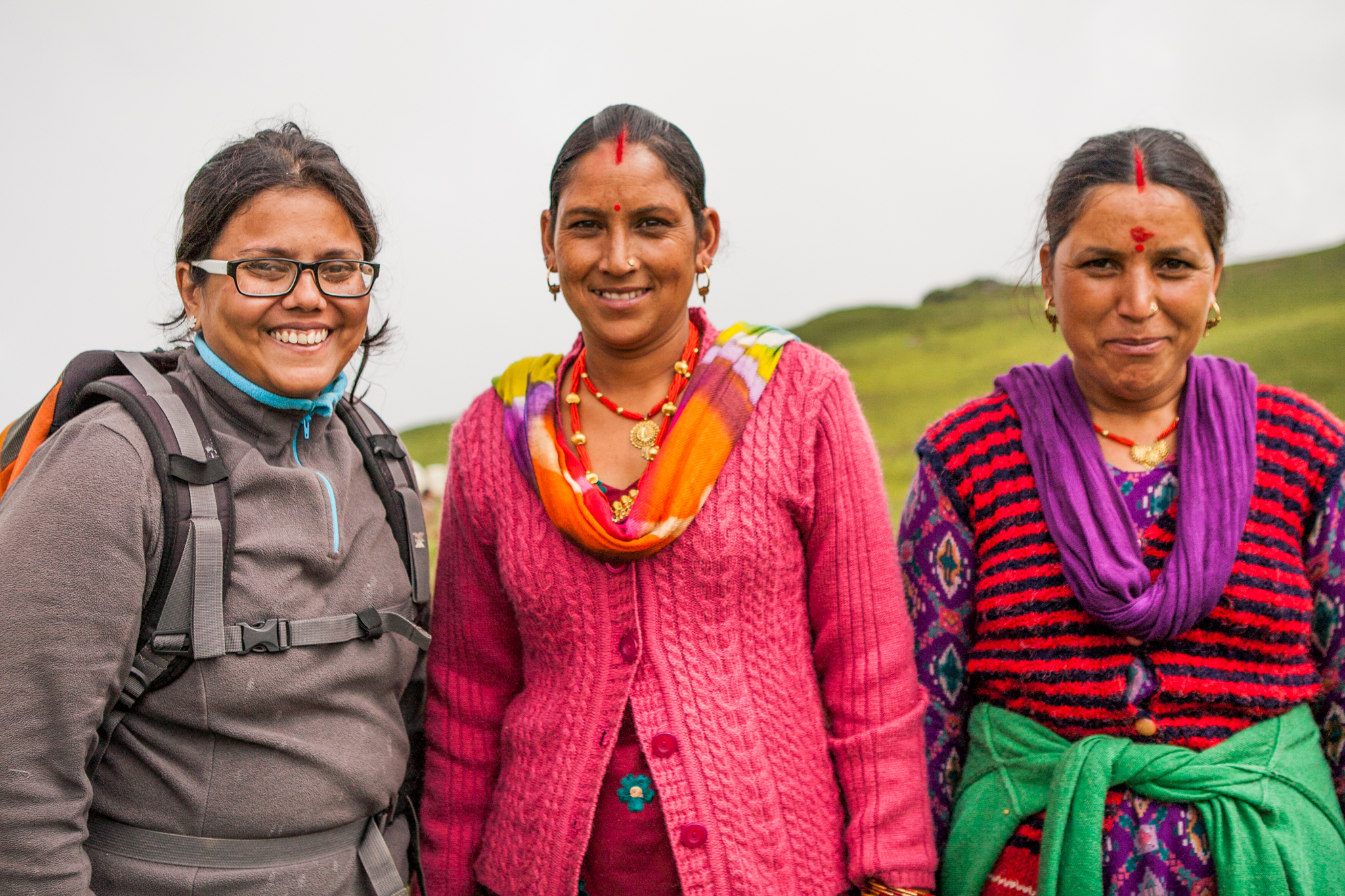 Once we were chatting about how tough and busy her life was. How she had aged rapidly, got wrinkles at a young age. “Your city life must be good.” We weren’t surprised at her assumption. We tried to show her the positives in her life – clean air, fresh food – most of which she grows herself. She had so many skills – farming, cooking, taking care of her cattle, and earning her living. We told her how in cities we didn’t have the privilege of growing our own food. Her expressions had now changed to happiness and a tinge of pride, and this time her question surprised us, “Why don’t you also buy a plot for yourself in the village?”

It was a remarkable question, in so many ways! 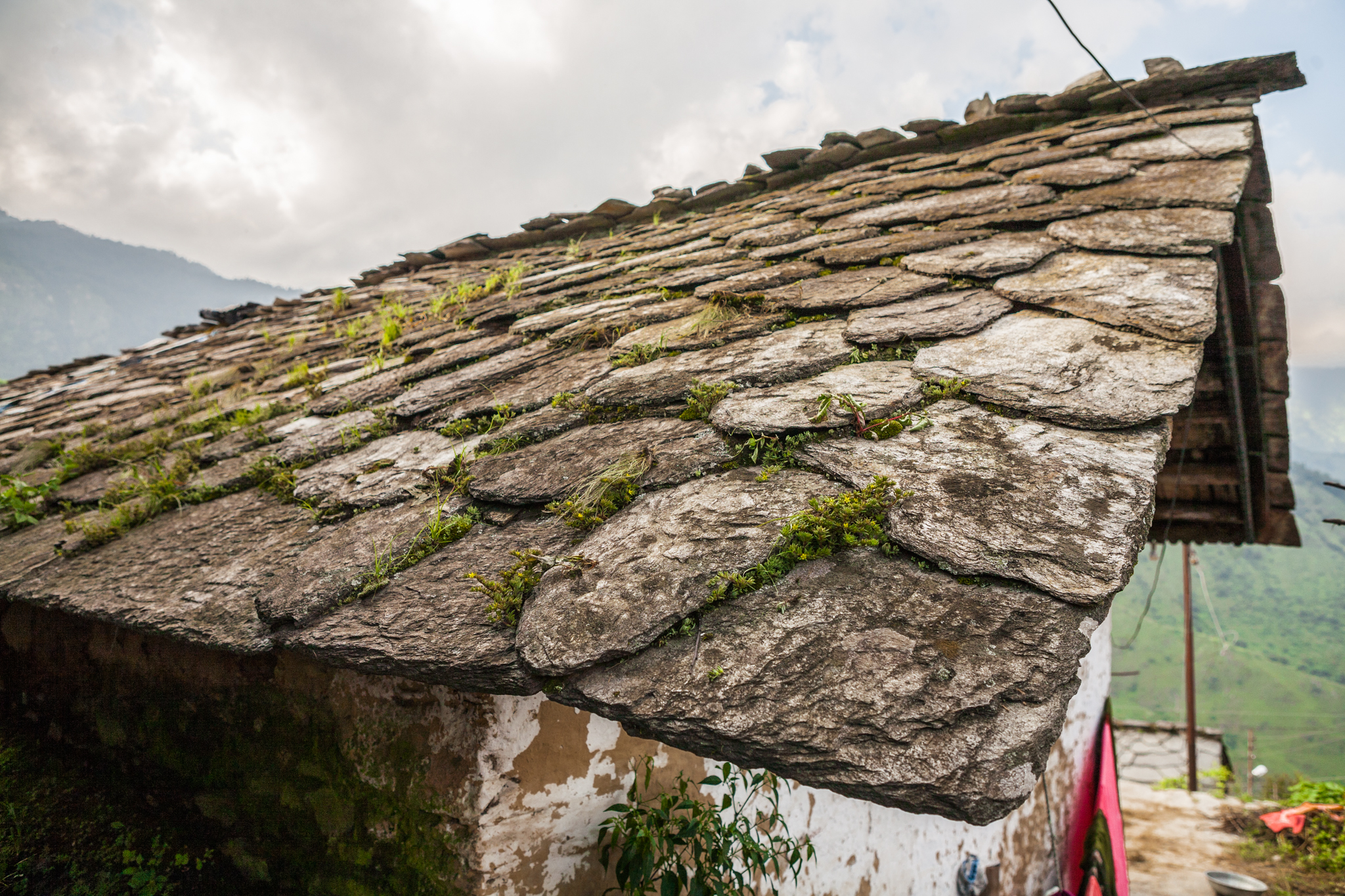 Every house in Raithal had a big courtyard made in stone (the same one they used to make the roofs), and each of these courtyards had a mystery hole. We got our answers when we saw two women husking the rice. The brown rice was from their farm. 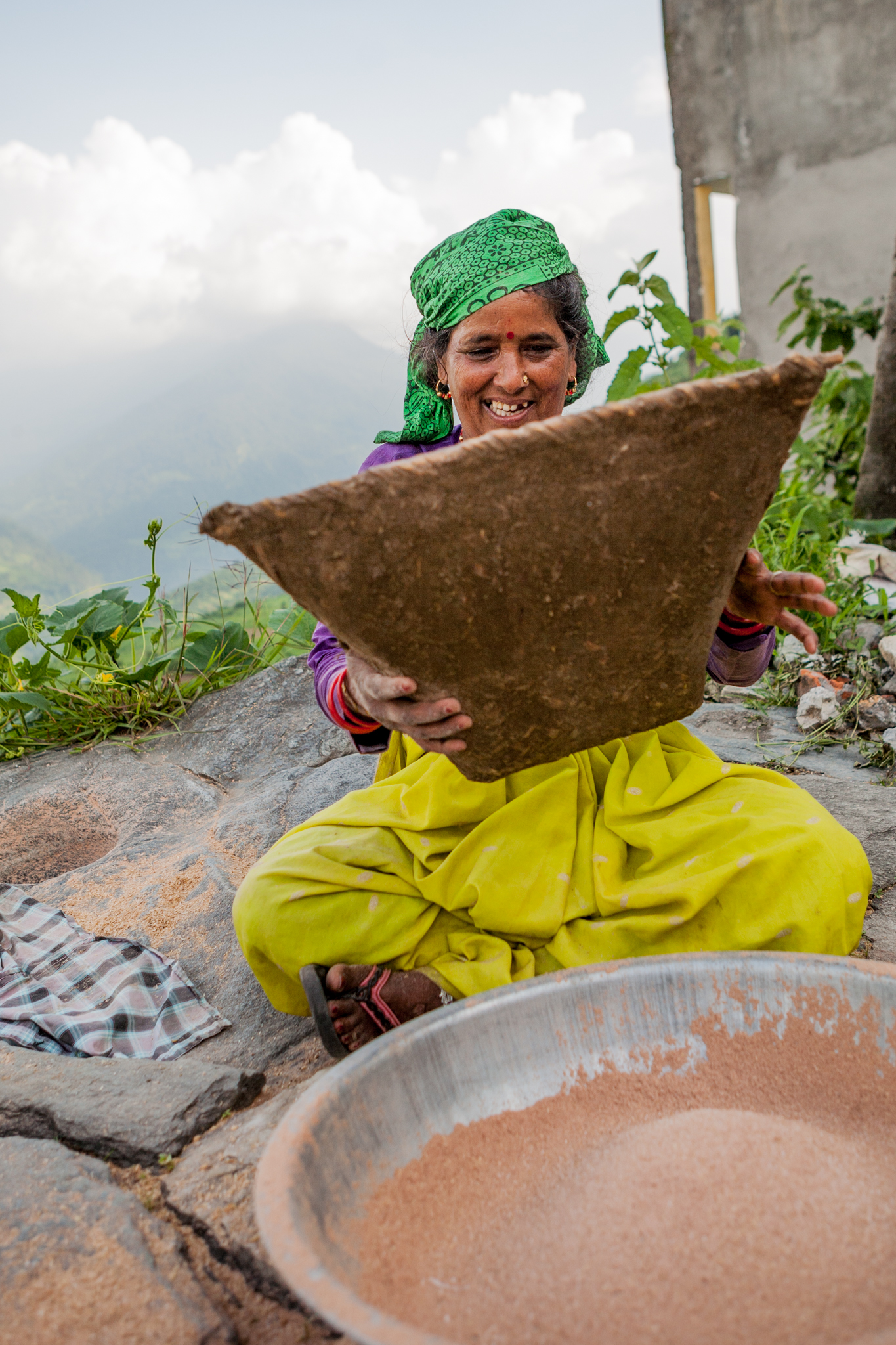 It looked like a nice little exercise and we asked if we could give it a try. Little did we know, we would be the laughing stock for everyone around. The ease in the woman’s actions defied how heavy the pestle actually was. We didn’t accomplish much except some entertainment. And got a sense of strength these mountain women possessed!

In the evenings, we would join a family walking back home with their cattle. Their pace and halts dictated by the whims of their bovine companions. If grass had to be had in the middle of the road, it had to be had!

If a group of cows blocked the road because well, they wanted to just stand there – then you had to wait for them to move. You didn’t want to invite the ire of a full grown Himalayan cow! From helping them call out their cows to get into their sheds to boiling water for the one who had recently delivered, we got to do it all.

“This is my sweet little baby, she’s just a few days old”, an old woman told us as she patted the adorable calf. As the patting and pampering continued, it felt like it was an old grandmother playing with her newborn grandchild – the love and affection on both sides just the same!

A motorable road connected Raithal to the villages further ahead – Natin, Dwari and Gorsali – or so we were told. But for the tyre marks, we would’ve assumed the road was actually closed for repairs. Away from the highways, that is how these mountain roads generally are! The only ones not complaining were the young guys of these villages – for them, it was a ready dirt track for some adrenaline rush!

This dirt track made the path no less than a nature trail. The sides were covered with colourful wild orchids. The river Bhagirathi could be seen far down.

A waterfall crossing here, a walk through the farms there. A village nestled down the mountain slope, always a temple announcing its start. And in between these tiny villages of the Garhwal mountains was a pretty dense “forest” – of cannabis! Some in bloom, the air pregnant with the smell of weed.

“Do you want to take some back home? Use it to make some “bhang” pakodas (cannabis fritters!), they are very tasty”, someone said. Was it a naive or a bold suggestion, we never did figure out!

Tips for places to visit around Raithal

Do you have any stories of exploring the tiny remote villages of the Garhwal Himalayas? Do share them in the Comments!