Our 6-week itinerary through New Zealand

New Zealand was our foray into “first world” travel. It was a short trip – just 6 weeks compared to the 5 months in South America. Though again, it was time for the southern hemisphere winter, it wouldn’t exactly be winter travel. We knew the language and New Zealand drives on the same side as India. All in all, we were set for 6 weeks of smooth sailing. 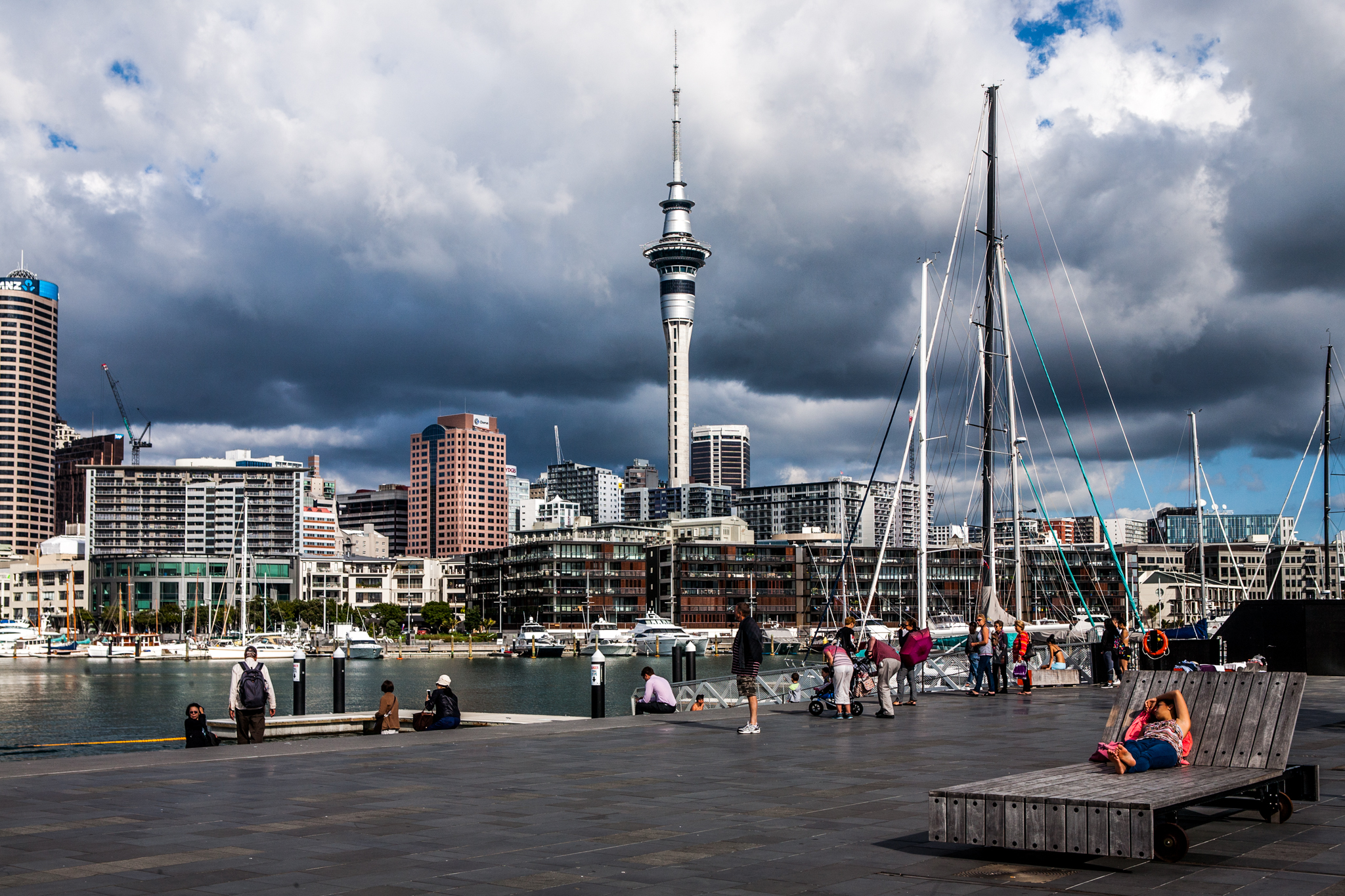 We landed in Auckland and headed straight to the home of Chef Makarnd. Which obviously meant that during our time in Auckland we didn’t have to worry about preparing the next meal, locating the supermarkets or queuing up in the hostel kitchens. 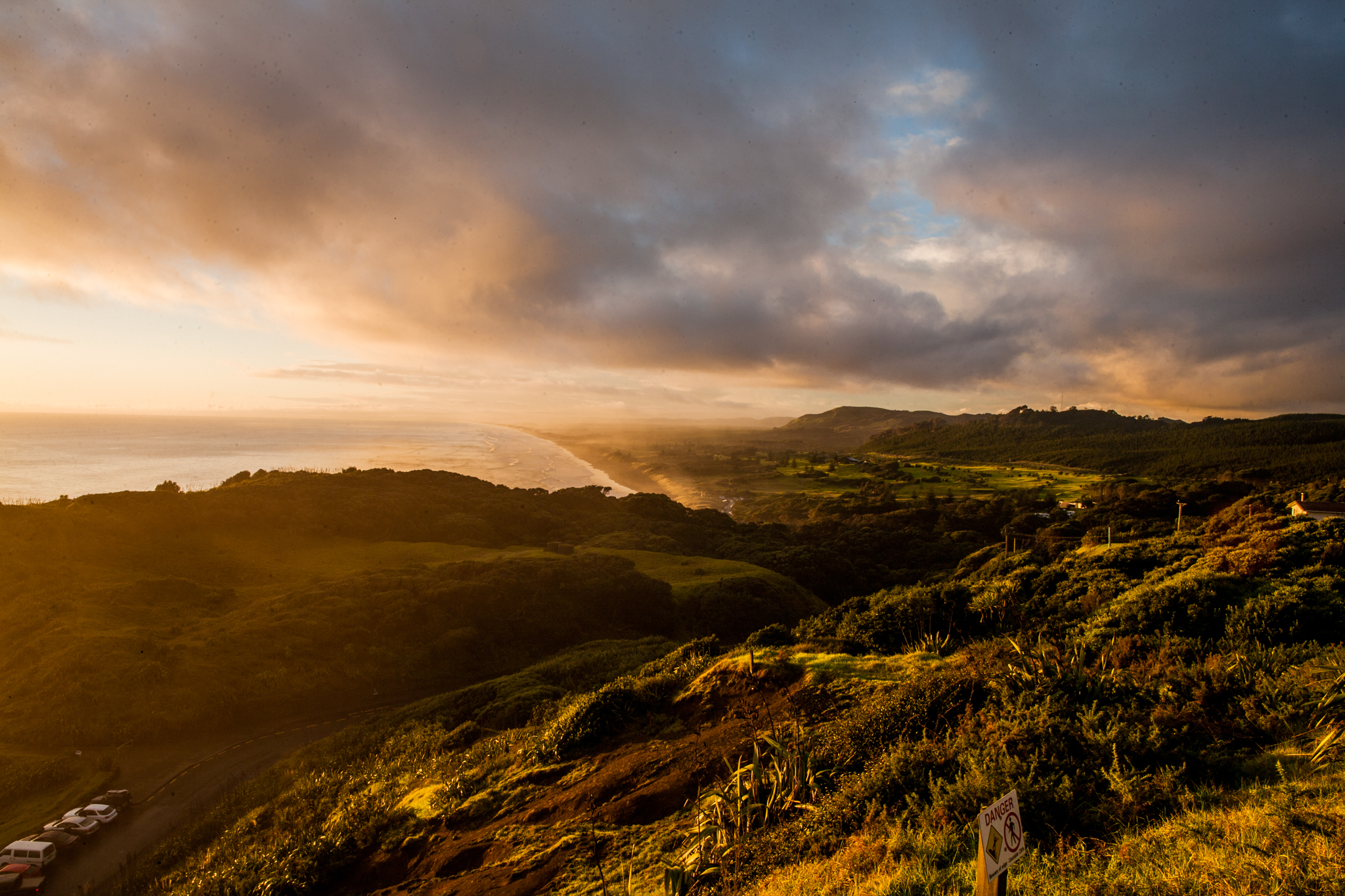 Auckland was a perfect way to orient ourselves for the rest of our trip. We explored places in and around Auckland – Mt Eden, Viaduct waterfront of Auckland and the beaches and waterfalls – Piha and Muriwai beaches and the Hunua waterfalls. We got acquainted with the driving rules, shopping rules and the general dos and don’ts for New Zealand. There weren’t many don’ts – except watching our speed limits. Fines for speeding are massive in New Zealand.

From Auckland, we went straight to Wellington.

Back to Couchsurfing in Wellington

Darci, originally from Canada, hosted us in Wellington where she lived in a beautiful modern home with Simon, a guy from Britain. Simon had been to India several times during which he a had learnt to art to Indian cooking. He now made his own spices (at home!) and every dinner during our stay in Wellington, Simon cooked us a grand delicious meal!

We explored the several bays of Wellington – mostly on foot, the Oriental Bay, Liall bay, Island Bay, were awed by the Weta caves and the Gallipoli exhibit at Te Papa museum and roamed around Cuba street. It was a perfect city to walk around. And the tagline “Absolutely positive Wellington” fits it perfectly.

A ferry, and we are in South Island

An inter-islander ferry navigating through the Cook Strait took us to the South Island of New Zealand in a tiny town called Picton. A short bus ride later we got to Nelson and got our first and probably the only scare of our travels in New Zealand. We learnt that all the hostels in New Zealand close at 8 PM if you’re reaching later than that, you need to pre-book and inform them accordingly. We were potentially stranded in a new city. A somewhat run-down hostel came to our rescue and we spent the night in a huge dorm all to ourselves. 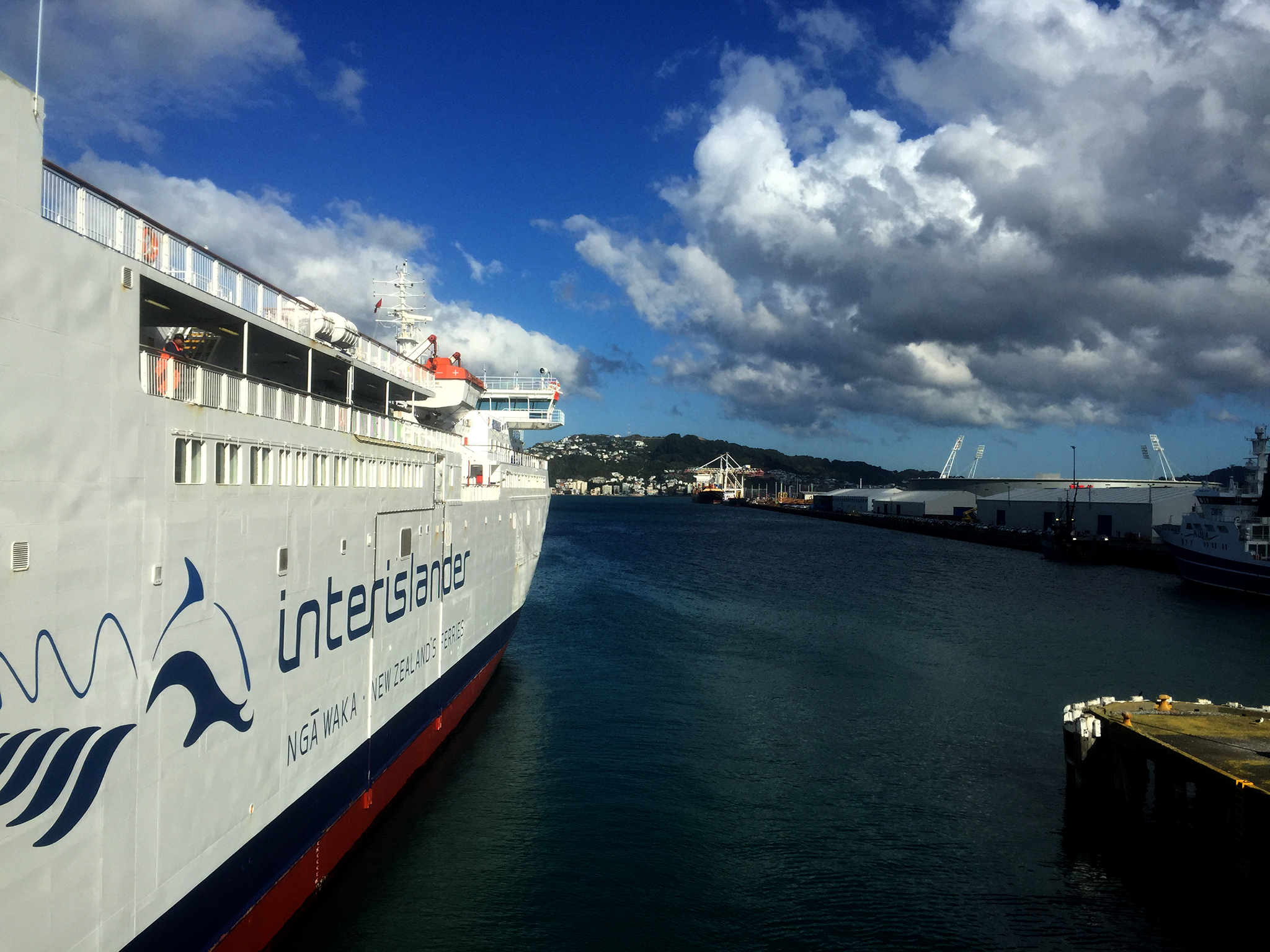 We were luckily in Nelson for the popular Saturday market and spent the morning talking the artists, buying fresh fruits and sipping coffee and enjoying some artisanal bread. Oh, and also being asked in a garden where we were enjoying our sandwich picnic if we wanted some ganja! 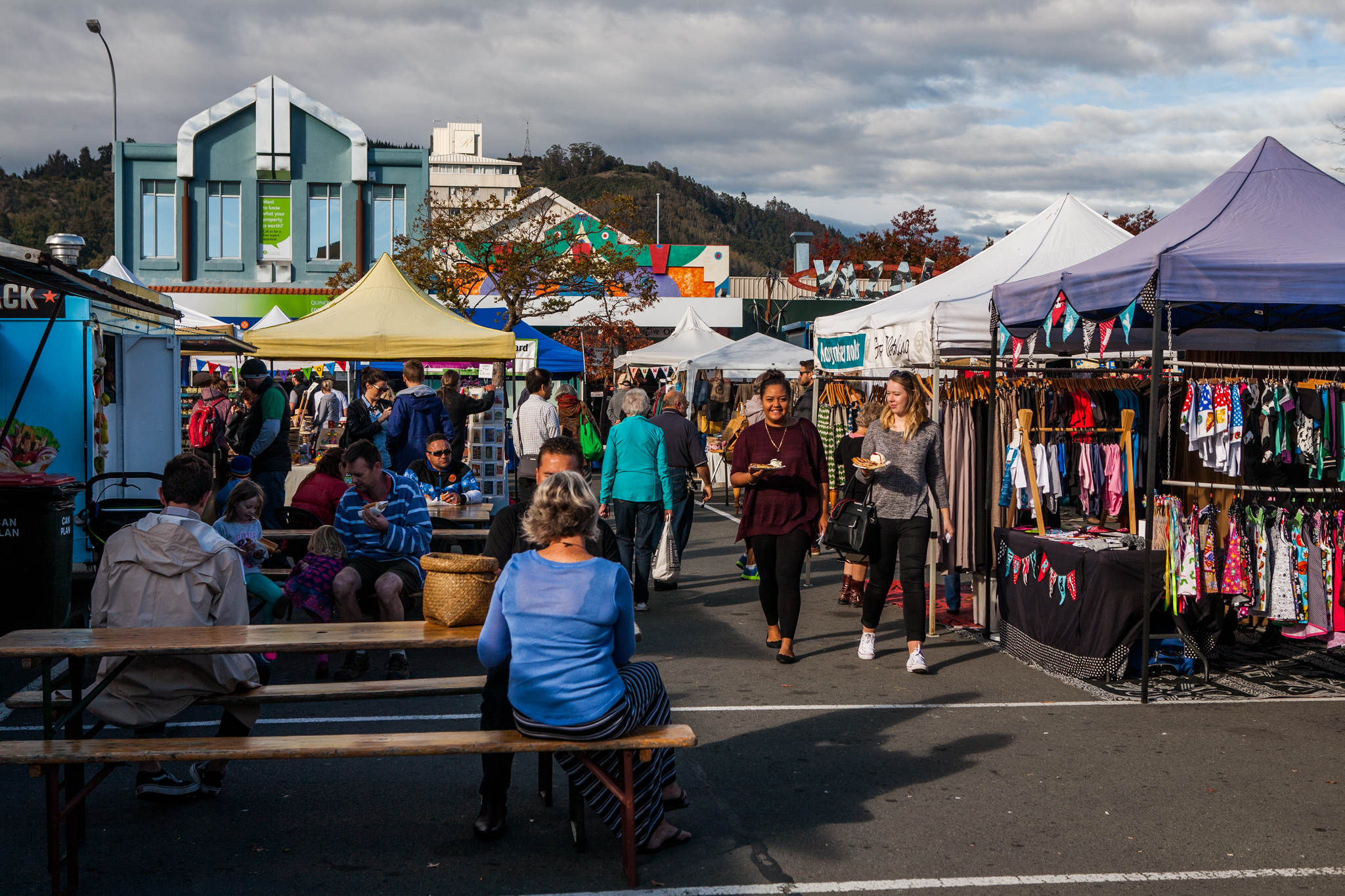 Heading into the wild – The Abel Tasman National Park

From Nelson, we arranged for a tour to take us into the Abel Tasman National Park. Partly by boat, and then a trek, we walked through the national park and saw mind-boggling beaches!

A stay in a regular little town of New Zealand called Motueka followed.

“The best part of New Zealand” – The Golden Bay

Simon was the one who suggested (insisted) we visit Golden Bay – the part of New Zealand almost no one visits! We can never thank him enough for this. We were blown away by our time in the Golden Bay – its bohemian character, absolutely delightful people (including our hosts at the hostel) and of course, the actual Golden Bay. 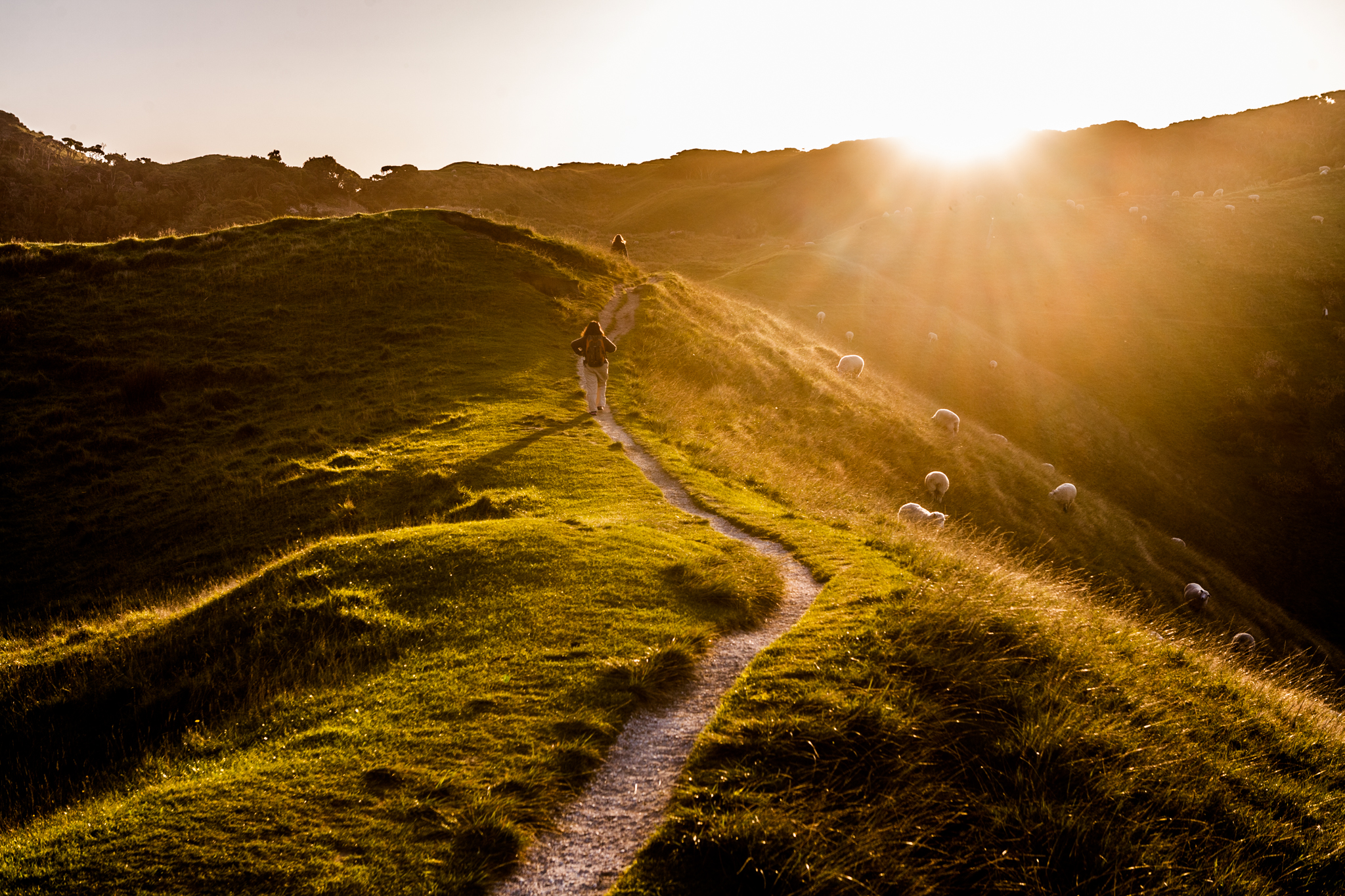 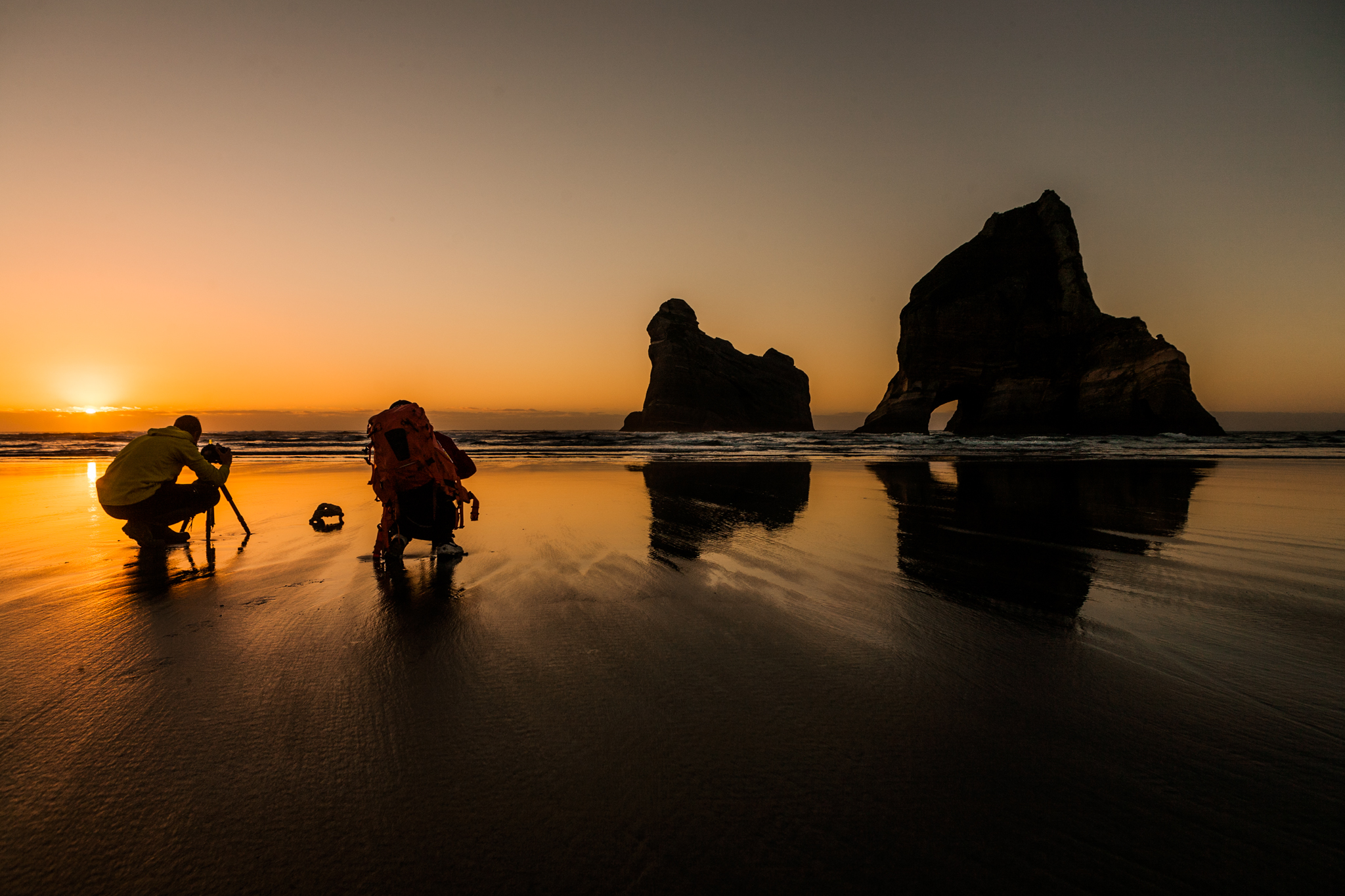 From the clearest water in the Southern hemisphere at the Pupu Springs, the spooky maze at the Labyrinth of the Rocks to the beaches and the bush around the main town of Takaka. And how can we ever forget the magnificent walk through the farms and the forest to the Wharariki beach and its rocks with the hole! Some say it’s the most beautiful part of New Zealand, and we want to agree – but then it’s a country laden with beauty!

The wild west and glacier country

As lovely as our time in the Golden Bay was and as much as we didn’t want to leave, the visa was ticking. We took the route down south on the west coast – ranked in the top 10 drives in the world! 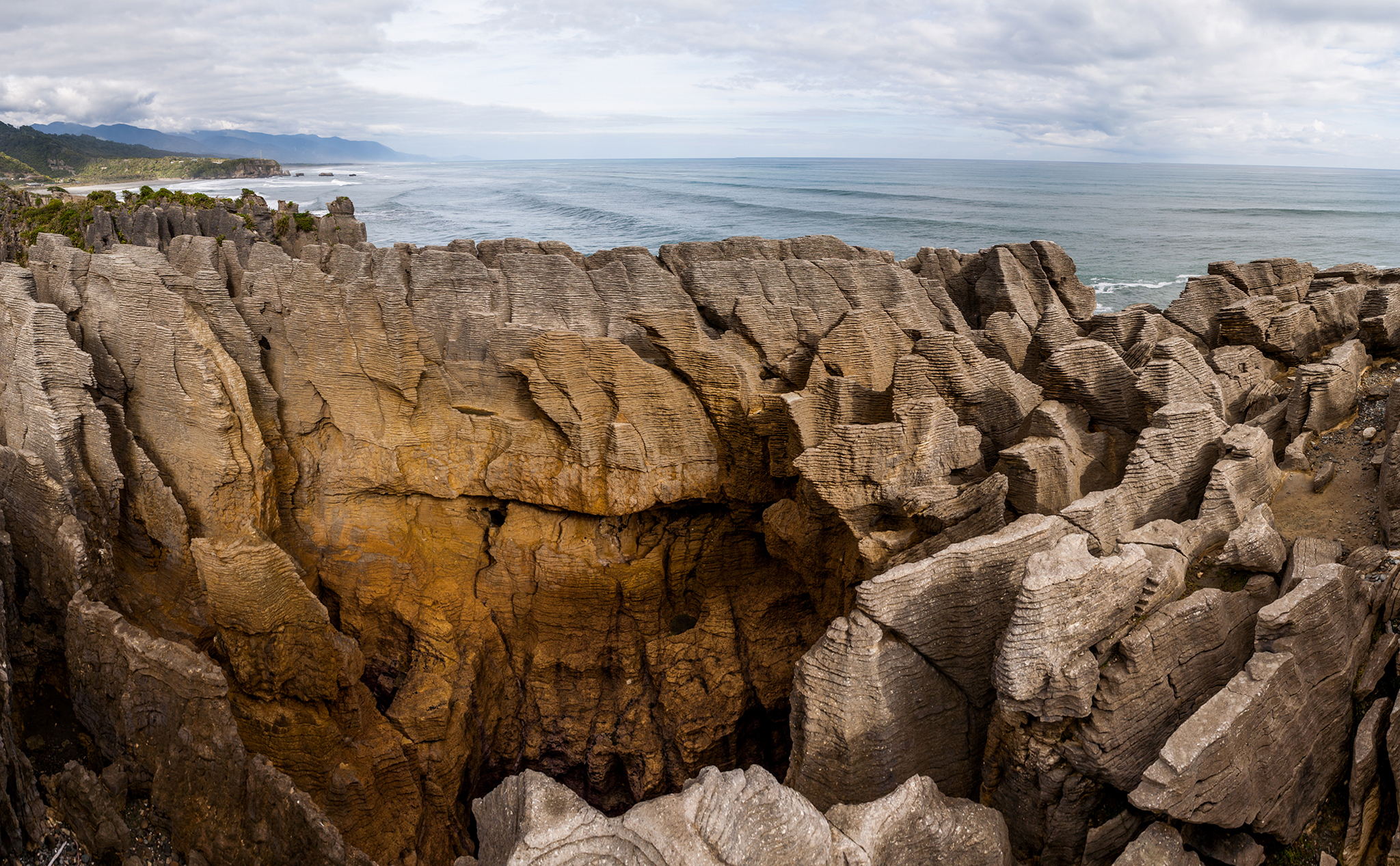 Driving along the west coast now, seeing formations like the pancake rocks at Punakaiki, passing through cool little towns like Hokitika (look at coollittletown.com – no kidding!) we reached the town of Franz Josef.

The glacier itself was a little anti-climatic (especially since the memory of Perito Moreno Glacier was still fresh) – a stark reminder of the global warming crisis.

We were waiting to see the fall colours ever since we had seen a glimpse of red leaves at Nelson. And Wanaka didn’t disappoint. The trees were all golden and red, as were the streets. That Wanaka Tree tried hard to steal the spotlight. The Paradiso theatre had the best ever cookies, and Mt Roy gave us a chance to trek after a while, and our hostel – perfect views.

We could’ve easily spent a month in Wanaka! 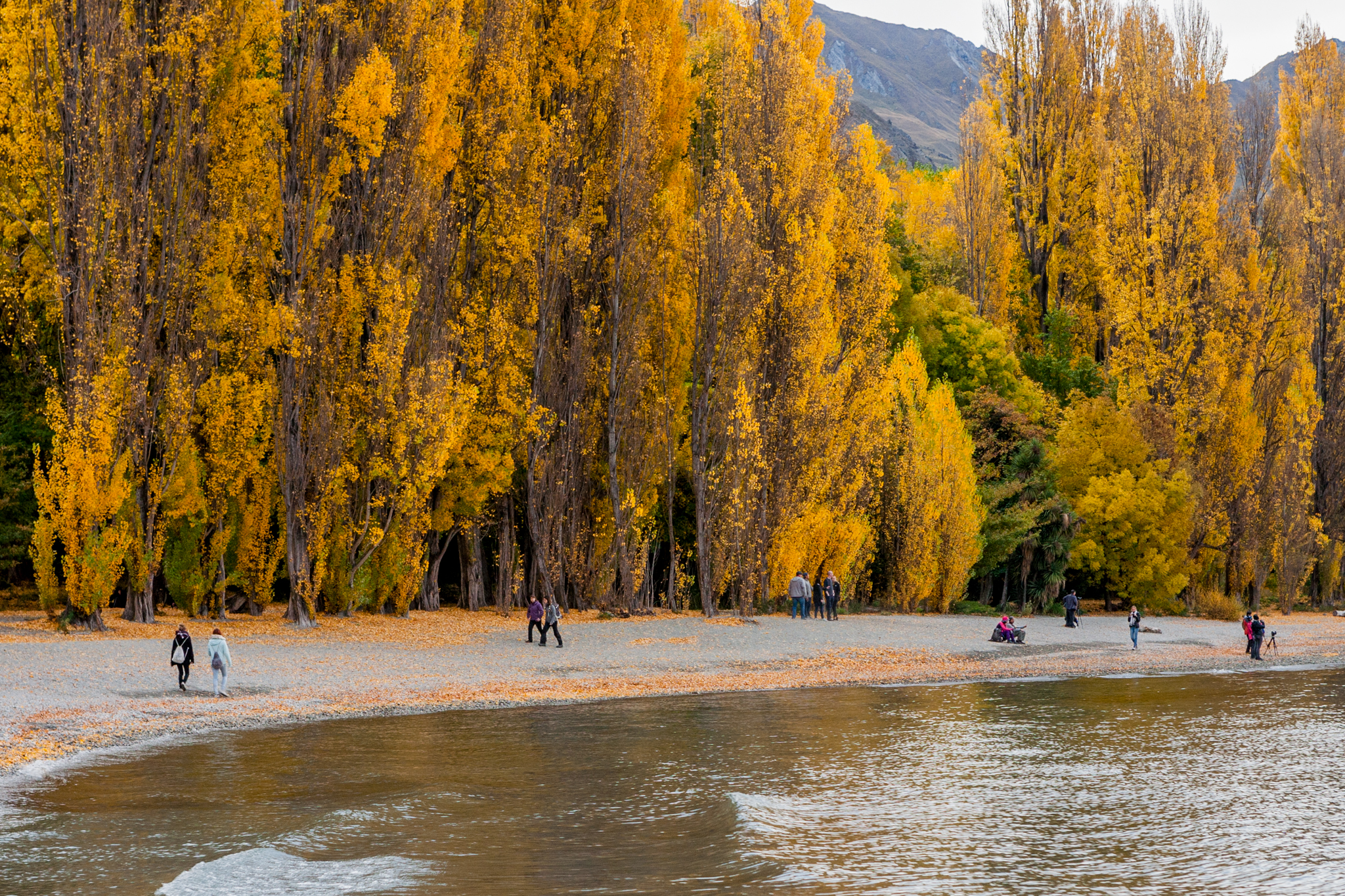 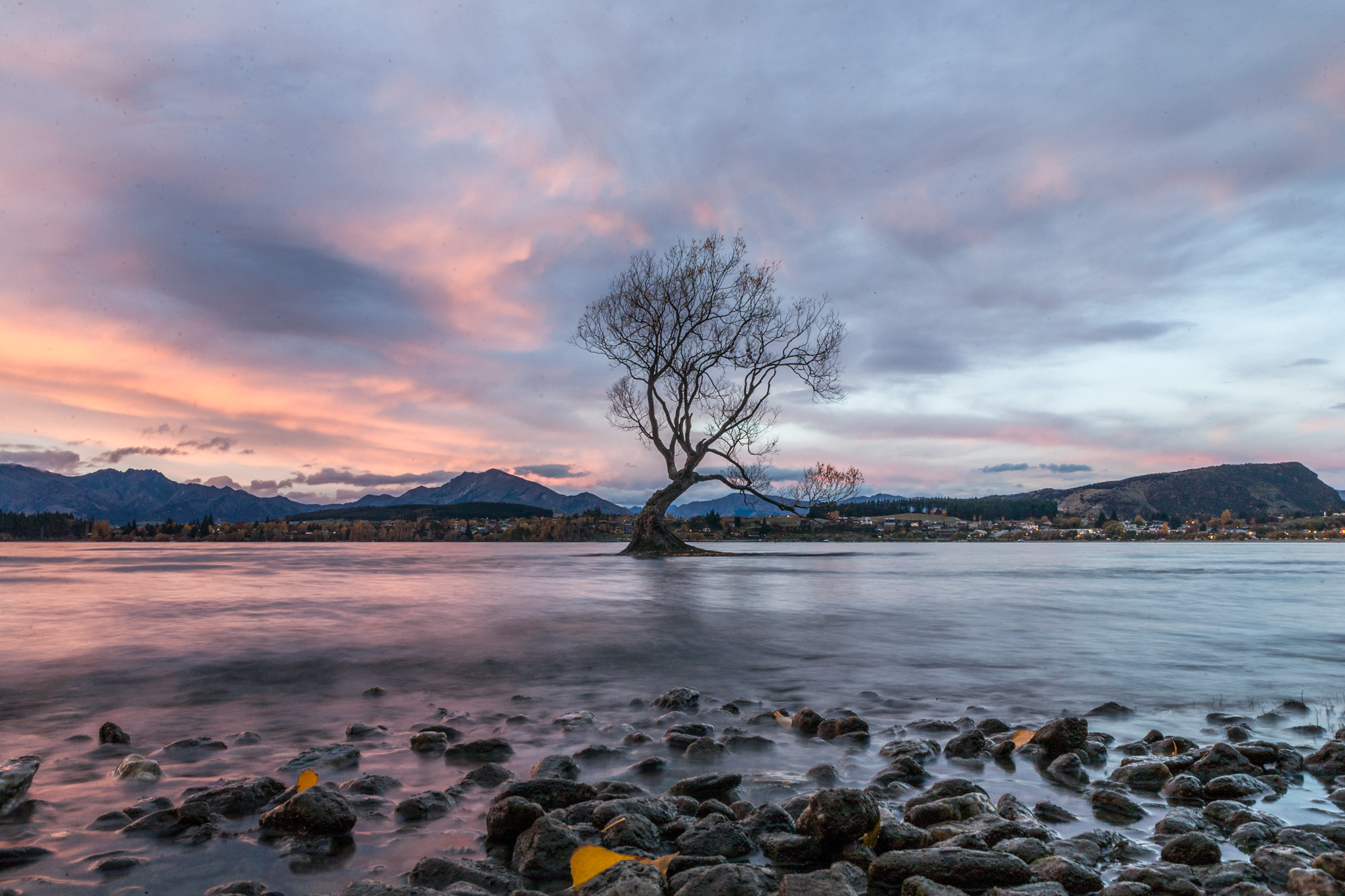 Queenstown was clearly the tourist hub of New Zealand. Studded with shops, tours and activities. Arrowtown was a perfect getaway from all the frenetic tourist madness.

Milford Sound – the most poular sight in New Zealand

Everyone visits the Milford Sound – any time of the year. The rains make the experience magnanimous. The drive to Milford Sound is a showcase of a series of waterfalls. And on the boat journey, we actually went under these thundering waterfalls!

Up again – through the Arthur’s Pass

This time we crossed over from the Tasman coast to the Pacific coast through the Arthur’s Pass. The pass was covered in clouds but that didn’t make the drive any less spectacular.

Christchurch still showed the impact of the devastating earthquake. Art was used as a tool to bring positivity, which was clearly reflected in the city’s infrastructure.

Lake Tekapo and the clearest sky in the Southern hemisphere

We lived right next to the bright blue waters of Lake Tekapo. The water was stunning, but we will remember Lake Tekapo as the place we got lost on a single route trek up to Mt John! How did we manage to do that, we still don’t know.

Up the Pacific Coast and Kaikoura

This time we drove up the Pacific coast to Kaikoura and got a chance to spend time with hundreds of sea lions at the Oahu stream. Marlborough country further up was full of vineyards, now also turning yellow.

Back on the North Island, up the west coast

Again in the parts of New Zealand not visited by many. End of the first day of driving brings to view the Mt Taranaki, an equivalent of Mt Fuji in the Southern hemisphere! Shrouded by clouds, we still get to see its perfectly conical shape. 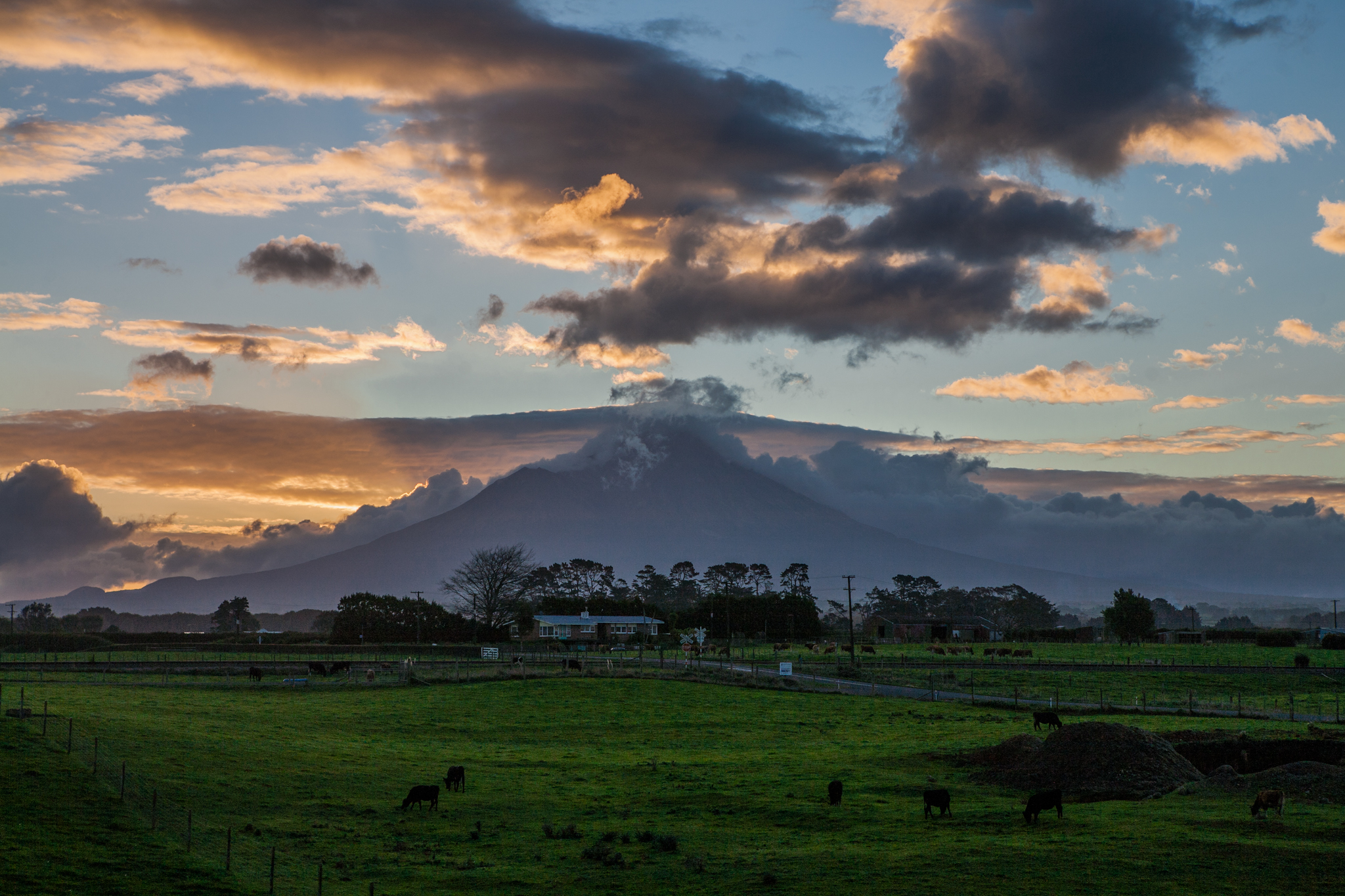 Visit to Egmont National Park and the drive around New Plymouth make the morning fresh as ever. Today it’s the day of black beaches of New Zealand. There is no one at Waiiti, the three sisters (actually just 2.5 now!) and the elephant rock greet us at Tongaporutu.

Since we have skipped the famous Waitomo glow worm caves, we head to the ones at Kawiti, run by a Maori family – descendants of the guy who originally found them! And this is the first time we head to a town to visit the public toilets! One look at the toilets of Kawakawa, and we know why they are an attraction!

Bay of islands and a rough sea

A rough sea greets us at Bay of Islands where we are scheduled for a boat tour. The captain gives us an option to leave with a full refund. We don’t have any days to spare so we decide to stick on. And suddenly, the weather takes a turn – for the better! We go up to the hole in the rock, but the captain doesn’t risk going through it. 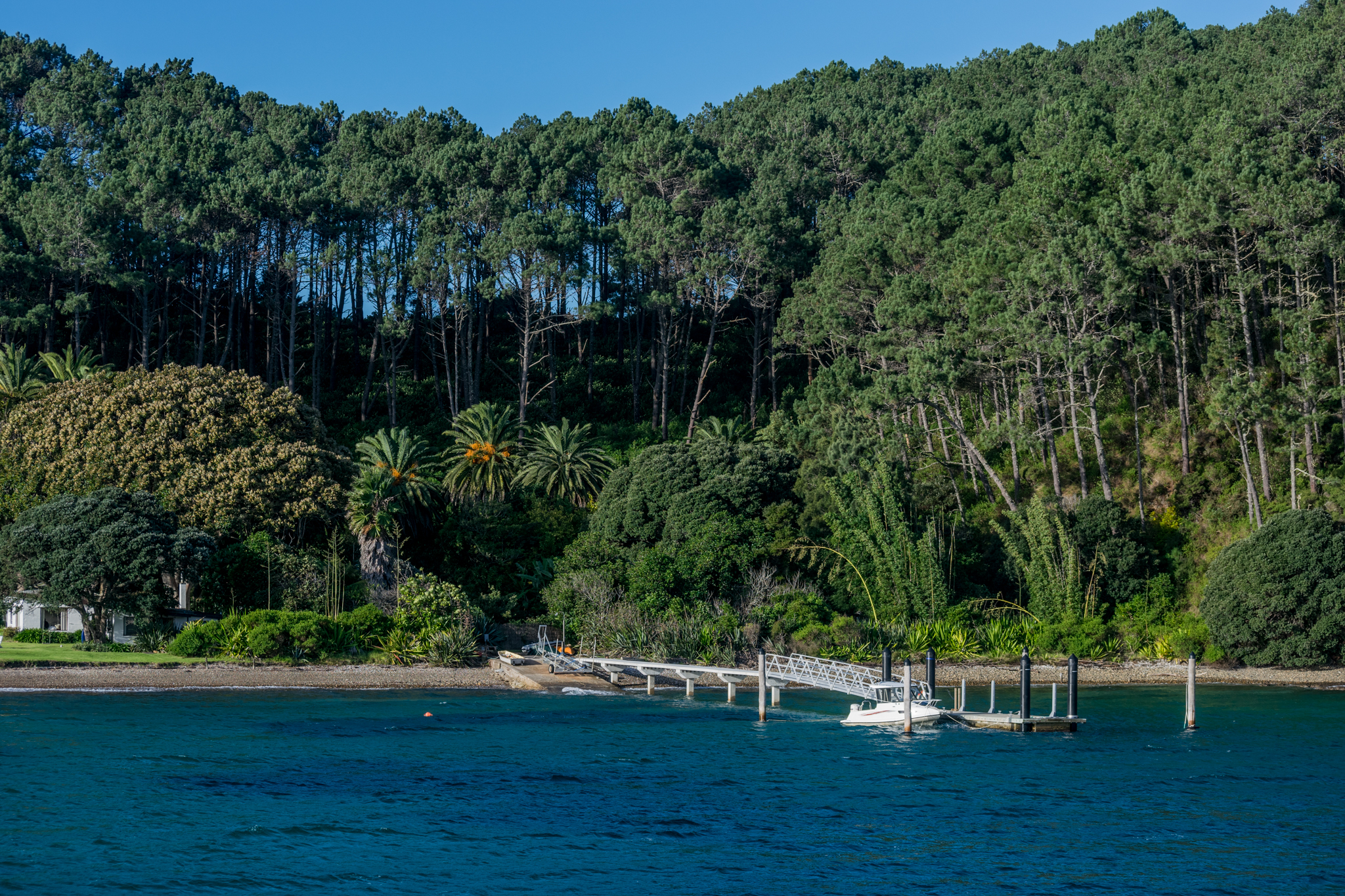 The next day we head to the northernmost point of Naw Zealand – Cape Reinga. Standing there next to the lighthouse, we stare at infinity. Miles and miles of landless ocean!

Back to Auckland and time to wave goodbye to New Zealand

The six weeks breezed past. New Zealand look so tiny on the map, we had thought six weeks would be ample time. But that was not to be.

It was only alright for a “first visit to New Zealand”!

Map of our travels in New Zealand 27 thoughts on “Our 6-week itinerary through New Zealand”