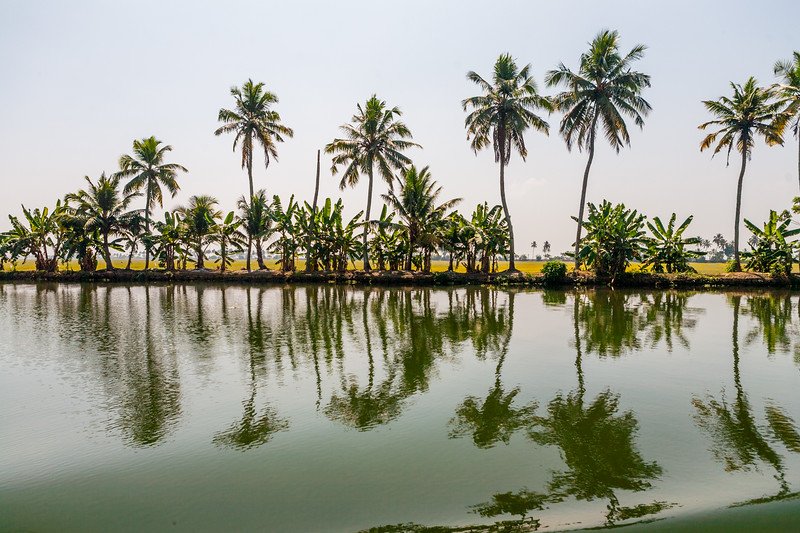 The first human of Kerala I met was way back when I was a little child. This human was Vatsala aunty. She was our neighbour, my mother’s best friend, a second mother to my sister and me, and to date one of my most favourite people.

She would be draped in a soft white settu mundu, she would smell a mix of coconut (from the oil in her hair that she tied in a bun), and sandalwood (from an inch long line of the paste on her forehead). She taught me to say, “adi venda, umma vena” (I don’t want a beating, I want a kiss). For the two decades that we were neighbours, we never cooked a meal at our place on Onam. We had to wake up and bathe early on the day of Vishu and go to her house to see the Vishu kani.

Every summer holiday, they would visit their hometown near Thrissur. They would return with a fixed bag of goodies – jackfruit fries, banana chips, and my favourite – the yellow, orange and black coloured halwas. All of these would be devoured with tales of the coconut trees in their grandma’s backyard, drawing water from the well there, and the monsoon that they had already met before coming back to Mumbai. Once again, smells of sambar powder and fish fry would emanate from their home, and several times in the day we would hear Vatsala’s aunty’s infectious laughter.

This was my introduction to Kerala, and without realising it, a deep-seated fondness for this magical seeming place became an integral part of me.

I got my first glimpse of the Kerala greens on a journey onboard the Kanyakumari Express, in 1998 (pre-Konkan Railway days). For a day and a half, our train had chugged through hot sweltering Andhra Pradesh. By evening, we entered Kerala, and boy, it felt like we had entered a different world. Everywhere was a picture-perfect postcard. Bridges over rivers with banks lined with coconut trees. Tracks running through dreamy villages, houses with a jackfruit tree or two laden with the green spiky fruits, kids waving to everyone in the train.

A chance to visit Kerala came much later in our travel lives.

Taken by surprise in Trivandrum

Trivandrum, with its graffiti walled roads, book stores under a banyan tree and road junction with a mosque, a church and a temple standing next to each other, was a capital like no other city we had visited so far.

We were visiting Trivandrum for a family event and were told of a concept called tree walk. Similar to free walking tours you have in tourist cities, this was a walk conducted by tree lovers. Every Sunday, they meet in a locality, select a species for the day and observe those trees. Luckily for us, a walk was scheduled when we were there, in the museum complex

During the walk, we met Anitha, who started this movement with other like-minded tree lovers of Trivandrum. They have now undertaken a more serious task of conducting a census of the trees and creating a database.

Thanks to Anitha and her colleagues, we saw the original version of the rubber tree. Original, Anitha told us, was “like it would grow in the wild, without being modified for maximum rubber production”. The only time we had seen it earlier was in the Amazon.

Young students, senior citizens, working professionals and botanists were all part of this group, passionately “talking trees” that Sunday morning.

What they were doing was simple – preserving and spreading awareness of their green heritage. Because, if they, the humans of this city wouldn’t, who would?

We had chanced upon this beach in Kovalam. Walking around the Vizhinjam lighthouse, the tallest in Kerala, we saw a stretch of sand with hardly any people, and some fishing boats. Away from the hustle and bustle of beach shacks and stores, this was a quiet little beach, with everyone minding their own business.

There was a newly married Indian couple standing gingerly in the waters, a French couple who had been coming there for a fortnight, to catch a sunset, and end up seeing only the clouds instead, there was a solo woman traveller reading a book, and there was us, watching the sky change from blue to pink to orange. There were boats with fishing nets drying on them, there were the fishing folks, gathering and sorting their fishing nets, there were the young guys who came running down from the resort on top for a game of football, there were two local guys engrossed in an intense game of frisbee.

There were all these multiple worlds, co existing effortlessly, harmoniously, as if this is the way it was always meant to be.

Read more: A day in Trivandrum and Kovalam beach, Kerala

The Chinese fishing nets meant this was on the trading route from the East, Jew town meant this place had opened its arms to the jews coming from Israel, and the burial spot of Vasco da Gama, in St Francis church stood testament to the first European visiting the Indian coast. Kochi also introduced us to the Kathakali art form.

These tourist attractions, as fascinating as they are, aren’t the only reasons Kochi left a mark on our minds.

It all started just as we landed in Cochin. The airport was laidback, but as we got out of the airport premises, we saw a massive field of solar panels. The Cochin International Airport has the honour of being the first airport in the world to be fully powered by solar energy!

Henry, our host had himself lived an adventurous life. He used to work in Kuwait as a driver for the US army trucks. Carrying supplies from Kuwait to the US army bases in Iraq. He had seen his friend being killed when a shell hit the windscreen of a truck he was driving.

Read more: Explore Kochi through the eyes of a foreigner

The backwaters in Alleppey

For us, on the state transport boat, the romance of the gentle squiggles, the steady symmetry of the coconut trees merging into the backwaters over the horizon was gratifying. The landscapes were a personification of a serene, stunning wonder.

We will read with fascination how Kerala became India’s most literate state, how it successfully managed the Nipah virus outbreak, or how the first solar-powered airport came into being.

The Human by Nature campaign by Kerala Tourism is a telling tale of what truly makes Kerala a special place.

In our visits so far, we have only just scratched the surface of what Kerala has to offer. Someday, when we and the world around us are in a better place, we hope to come back and unravel more stories that are human by nature.

This post was sponsored by Kerala Tourism. Words, opinions and experiences are as always, ours. Or, the day we became foreigners in our own country Kochi is in Kerala – and we had fallen in love with Kerala after our short maiden visit. We had never travelled to Kochi before. These reasons were enough for us to book our tickets to New Zealand via Kochi because, in the flurry of

You whizzed past it on the long train journeys on family trips during the school holidays. Stared wide-eyed as the windows of the Indian Railways sleeper coach revealed a world of straw huts and thatched roofs. Invariably, a jackfruit tree in the front yard. Even waved to someone your age, sitting in the canoe “parked” A day in Trivandrum and Kovalam beach, Kerala

9 thoughts on “Human by Nature – what makes Kerala special”